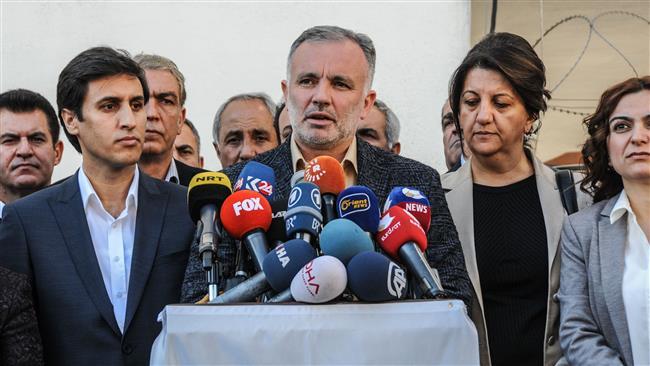 Turkish police have arrested the spokesman of the Peoples’ Democratic Party (HDP) as part of the government’s crackdown on the pro-Kurdish opposition party launched following last year’s failed military coup.

Axar.az reports that, an unidentified Turkish security source said Ayhan Bilgen, who also serves as the MP for the city of Kars, was taken into custody at Ankara Esenboga Airport on Sunday and would be taken to southeastern Diyarbakir Province, Turkey’s Anadolu news agency reported.

Bilgen was detained for his failure to give testimony in an alleged terror probe underway by Diyarbakir prosecutor’s office, the source added.

Huda Kaya and Meral Danis Bestas, two other HDP lawmakers, were arrested on Saturday as part of the same investigation and released under judicial supervision.

Protesters shout slogans and hold placards during a demonstration against the Turkish government's crackdown on the Peoples' Democratic Party (HDP) in Istanbul, Turkey, November 20, 2016. (Photo by AFP)
The crackdown on opposition is part of measures taken under a state of emergency declared following the abortive military putsch on July 15, 2016, blamed on the movement led by US-based opposition cleric, Fethullah Gulen.

In November 2016, 13 HDP lawmakers were detained on charges of links to Kurdish militants. They have all denied having any ties with the Kurdistan Workers’ Party, also known as the PKK.