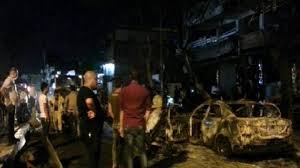 Iraqi forces battled Islamic State militants in their stronghold of Mosul on Wednesday and took control of the last major road leading west from the city, before bomb blasts ripped through a wedding party near Tikrit, killing more than 20 people.

The blasts in the village of Hajjaj, reported by local officials and medics as suicide attacks, were not immediately claimed, although Islamic State has carried out similar actions as it comes under pressure in Mosul.

A police source said two blasts hit the wedding and two more targeted security forces at the scene shortly afterwards. There were ongoing clashes between security forces and militants in the area, he said.

Inside Mosul, troops battled the fighters, who hid among the remaining civilian population and deployed snipers and suicide car bombs to defend their last major Iraq stronghold.

The US-backed campaign to crush the militants saw Iraqi forces recapture the eastern side of the city in January. They launched their assault on the western half last month.

The retreat of Islamic State’s self-styled caliphate, which leader Abu Bakr al Baghdadi declared from a mosque in Mosul’s old city in 2014, has been accompanied by bomb attacks in areas outside the group’s control, including Baghdad and cities in neighbouring Syria.

The caliphate has spanned large areas in northern Iraq and eastern Syria. Losing Mosul would deal a fatal blow to Islamic State’s hold over territory in Iraq.

Fighting is expected to get tougher as Iraqi troops push further into the more densely populated areas in the western half of the city, including the old city.

Military officials had said that Rapid Response troops, an elite interior ministry division, recaptured the provincial government headquarters on Tuesday. They also took the central bank branch and a museum where militants had filmed themselves destroying priceless statues in 2015.

“The museum is completely empty of all artifacts. They were stolen, possibly smuggled,” Lami said.

Lami said most of the fighters that had fought around the governorate building were local, but some were foreigners.

“An order was issued for foreign fighters with families to withdraw with them. Those who do not have a family should stay and fight, whether foreign or local,” he said.