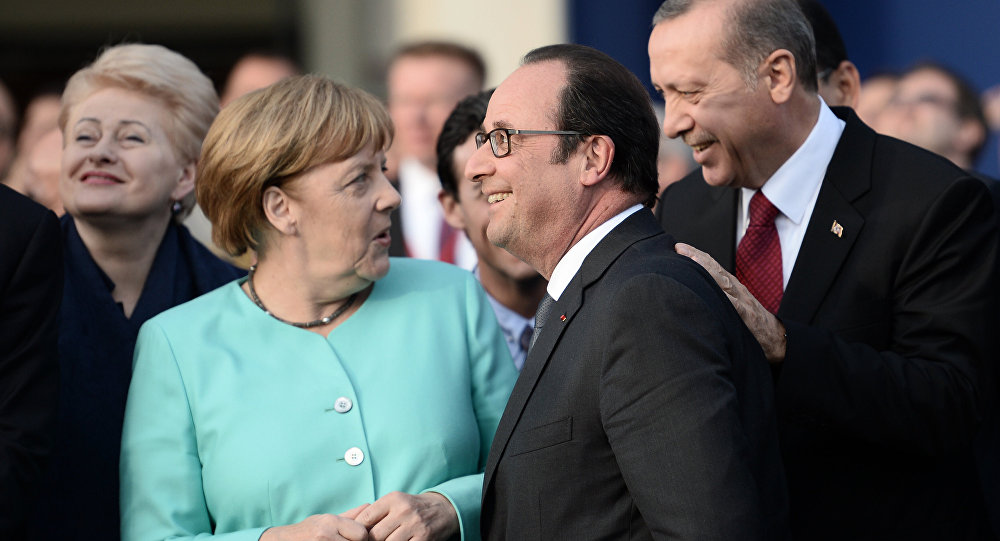 The leaders of France and Germany condemned Ankara's rhetoric of comparing EU states' authorities with Nazis.

"The President of the Republic and the Chancellor consider that comparison with Nazism or any other aggressive comments regarding Germany or other [EU] member states are unacceptable," the statement said.

Hollande and Merkel discussed the issue, with the French leader expressing Paris solidarity with affected countries.

The two leaders also agreed on future events related to the referendum that might be held in France and Germany.

"They [Hollande, Merkel] agree that these events might be organized if particular conditions are fulfilled in strict accordance with German or French legislation, in absolute transparency and within the legal deadlines," the statement read.

The relations between Berlin and Ankara became strained after German-Turkish journalist Deniz Yucel was arrested in Istanbul in February over alleged links to a terrorist organization and terrorist propaganda. The situation between the two nations deteriorated further as authorities of several German cities banned Ankara’s campaign rallies ahead of a crucial vote on the constitutional reform on bolstering the president's powers in Turkey. On March 5, Turkish President Recep Tayyip Erdogan compared the German authorities with Nazis, criticizing Berlin for the rally ban.