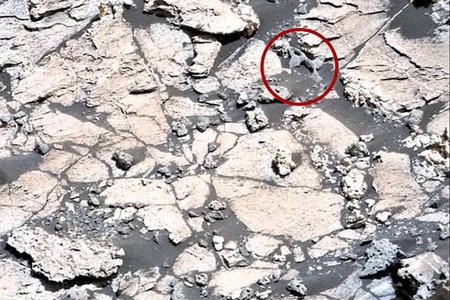 Online conspiracy theorists believe they know the answer after spotting what appears to be set of bones on the surface of MARS. The "discovery" was made after poring through pictures beamed back from NASA's Curiosity rover.

The rover is currently exploring the rocky surface of the distant planet and makes all its images free to view in the public domain. But a particular pair of shots has caught the interest of the alien-hunting community after appearing to show decaying bones lying in Mars' red dust.

It was the Martian Archaeology channel and immediately seized on by those believing extra terrestrials could have once lived on the planet. "After years of research and study, I'm convinced now, more then ever, that there much more to Mars then what NASA admits to," posted a user named TJ Devereaux.

"I'm certain life, including water, and intelligent life forms, once occupied the planet, and... big leap here... that both still exist, in much smaller quantities."

As well as just believing the images show bones, alien hunters are convinced that the dark patches are evidence of lichen growing on them. Although NASA has growing ambitions to visit the red planet in the near future, it is certain there is no longer any intelligent life left on the planet.

These "bones" are far from the first objects allegedly spotted on Mars.