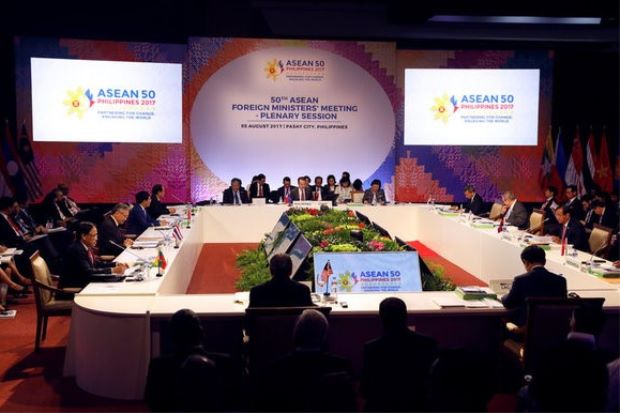 The Philippines announced Friday at least 20 world leaders confirmed their attendance at the 31st Association of Southeast Asian Nations (ASEAN) Summit from Nov. 12 to 14.

Axar.az reports citing AA that, as the ASEAN leaders and their dialogue partners converge on the country, the government's security forces are set to secure the delegates for the Summit and related meetings, officials said.

National Capital Region Police Director Oscar Albayalde told newsmen in Manila that 60,000 security personnel from 21 government agencies that include the coast guard, policemen and military forces have been deployed in Manila and in Clark, Pampanga since Friday.

"We are all set to provide security all leaders and delegates for the ASEAN Summit," Albayalde was quoted as saying.

The Department of Foreign Affairs spokesman Roberpierre Bolivar said the attendance of the world leaders at the Manila summit is a testament to the deep and strong bonds between ASEAN and their dialogue partners. It also speaks to the keen interest of these countries and the UN to continue to forge a strategic cooperation on areas of shared interest.

"This series of meetings is the largest gathering of world leaders that the Philippines under the leadership of President Rodrigo Duterte will be hosting during his chairmanship " said Bolivar.

The meetings in Manila will cover a range of common concerns, including trade and investment facilitation, innovation, connectivity and strengthening the ASEAN community, he said.

These coincide with the grand celebration of the ASEAN regional bloc's 50th anniversary.

Most of the events will take place at the Philippine International Convention Center (PICC) in Roxas Boulevard, Manila. The area encompassing the Cultural Center of the Philippines is already lockdowned for security reasons.

The Opening Ceremony of the 31st ASEAN Summit and Related Summits takes place on Monday. This will be followed by a Commemorative Summit on Tuesday.

The event also includes the 12th East Asia Summit, Regional Comprehensive Economic Partnership Summit, 15th ASEAN-India Summit, Signing ceremony of the ASEAN Consensus on the Protection and Promotion of the Rights of Migrant Workers, Closing Ceremony of the 31st ASEAN Summit and Related Summits and the handover of the ASEAN Chairmanship to the Republic of Singapore, and Press Conference with President Duterte.