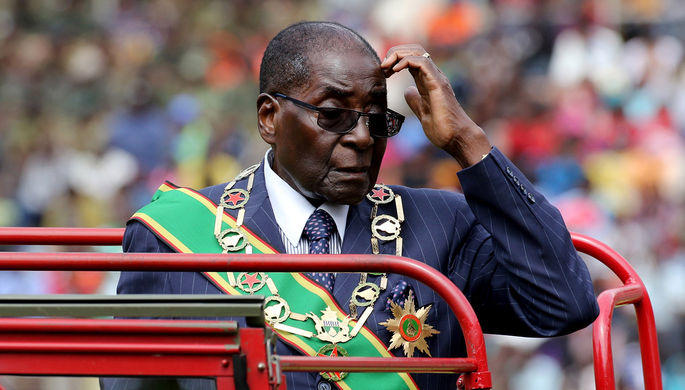 Zimbabwe’s President Robert Mugabe has been fired as the leader of the ruling ZANU-PF party, less than a week after the military seized power in the African country, party sources say.

According to ZANU-PF sources on Sunday, former vice president, Emmerson Mnangagwa, who was sacked by Mugabe this month, has been appointed as new party leader.

The announcement came following an emergency meeting of the ruling party after which one of the delegates told Reuters, "He has been expelled," adding, "Mnangagwa is our new leader."

"A resolution has been adopted to recall the president and elevate Mnangagwa as the party president," another delegate was quoted by AFP as saying.
ZANU-PF sources say Mugabe's wife Grace, who hoped to succeed Mugabe, has been also expelled from the party.

Leader of Zimbabwe's war veterans, Chris Mutsvangwa, has also confirmed that ZANU-PF has replaced Mugabe with Mnangagwa as leader.

Mutsvangwa added that ZANU-PF has starting the process to remove the 93-year-old Mugabe as president of Zimbabwe.

Mutsvangwa went on to threaten that there would be calls for street protests if Mugabe refused to go, telling reporters, "We will bring back the crowds and they will do their business."

The 75-year-old Mnangagwa is now expected to lead an interim post-Mugabe unity government and concentrate on rebuilding relations with the outside world. The former vice president is also expected to undertake the daunting task of stabilizing an economy in freefall.

The development came just a day after hundreds of thousands of people marched through the streets of capital, Harare, calling for the resignation of Mugabe after nearly four decades in power starting after the former British colony gained independence from Britain in 1980.

An estimated 5,000 elated demonstrators marched through the capital city on Saturday, waving national flags and chanting slogans against the 93-year-old veteran amid nationwide tensions over an effective coup against him.

Organizers of the mass rally said the move was “a show of people's force" and public defiance against the long-time president and his close allies.
Political tensions emerged in Zimbabwe earlier this month after Mugabe fired Mnangagwa and accused him of plotting to take power, including through witchcraft.

Mnangagwa, who enjoyed the backing of the military, had previously been considered the most likely to succeed the president if Mugabe resigned or died while in power. His sudden dismissal, however, raised speculations that Mugabe was clearing the way for his wife, Grace, to take the position.

On Wednesday, Zimbabwe’s military forces seized power in the country, after soldiers and armored vehicles began blocking roads to the main government offices, the parliament, and the courts in central Harare. The African Union’s leader, Alpha Conde, has already described the move as a “coup.”

Mugabe and his military forces, who had long helped him stay in power, had recently been at odds over his successor. The power clash had culminated in the sacking of Mnangagwa.

The military, which insists it is only going after “criminals” and is not planning to take power, has also detained finance minister, Ignatius Chombo, a leading member of the so-called ‘G40’ faction of the ZANU-PF, run by Grace.

Mugabe and his wife have been on the European Union's sanctions list along with other key figures in Zimbabwe's ruling elite, facing travel bans and asset freezes abroad.