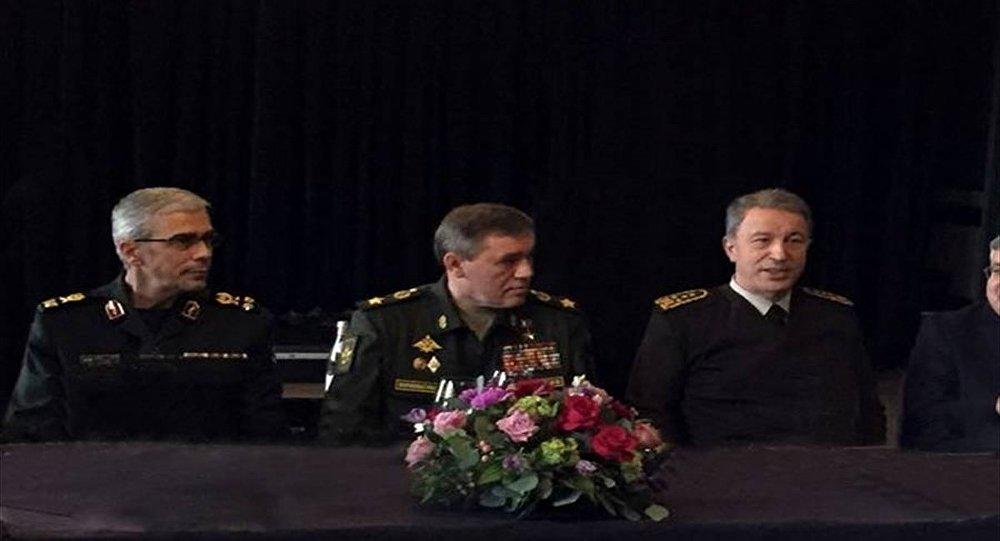 Army chiefs from Turkey, Iran and Russia discussed regional issues in Russia's coastal city of Sochi on Tuesday, according to the Turkish General Staff.

Axar.az informs citing AA that Turkish Chief of General Staff Gen. Hulusi Akar met his Russian and Iranian counterparts to discuss security issues, collaboration in the fight against terror groups as well as the reduction of violence in Syria and de-escalation zones, which were established after the Astana talks, the statement said.

The meeting came while Syrian regime forces intensified their attacks on eastern Ghouta, east of damascus, despite it having been designated as a de-escalation zone.

Eastern Ghouta falls within a network of de-escalation zones -- set up in Syria by Turkey, Russia and Iran -- in which acts of aggression are expressly forbidden. Regime forces have repeatedly attacked the district this week, leaving dozens of civilians dead or injured.

"The parties agreed to increase coordination in the de-escalation zone in Idlib, and completely eliminate the remaining members of Daesh and Al-Nusra terror organizations in Syria," read a statement from the Russian Foreign Ministry issued earlier on Tuesday.

On Wednesday, the presidents of the three guarantor countries are expected to discuss the progress on reducing violence in Syria and de-escalation zones.

Turkey and Russia, together with Iran, are the guarantor countries which brokered a cease-fire in Syria in December 2016, which led to the Astana talks that ran parallel to UN-backed discussions in Geneva to find a political solution to war in Syria.