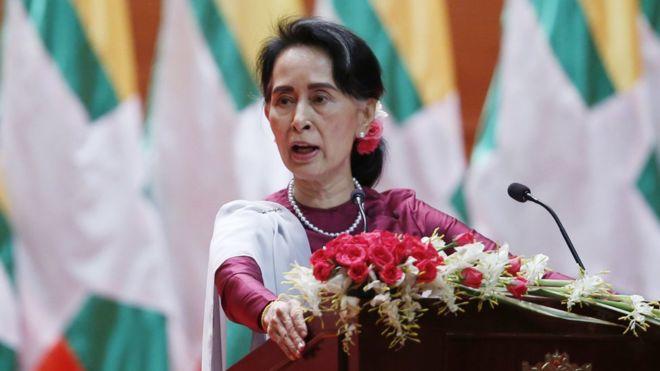 Aung San Suu Kyi has been formally stripped of the Freedom of the City of Oxford award over her response to the repression of her country’s Rohingya Muslims.

Axar.az informs that Oxford city council voted unanimously to permanently remove the honour given to the de facto leader of Myanmar in 1997, and said it did not want to celebrate “those who turn a blind eye to violence”.

Oxford councillors had previously voted to support a cross-party motion to remove the award, and made the decision official in a vote on Monday evening.

The vote comes on the same day Myanmar’s powerful army chief told Pope Francis there is “no religious discrimination” in Myanmar.

Over 600,00 Rohingya Muslims have been driven from Rakhine state in western Myanmar into neighbouring Bangladesh through a series of military operations, which the United Nations has described as a “textbook example of ethnic cleansing”.

Cllr Mary Clarkson (Lab), who proposed the motion, told the BBC: “Oxford has a long tradition of being a diverse and humane city, and our reputation is tarnished by honouring those who turn a blind eye to violence. We hope that today we have added our small voice to others calling for human rights and justice for the Rohingya people.”

In 2012, Suu Kyi was celebrated with an honorary doctorate from Oxford, and held her 67th birthday party at St Hugh’s college, where she studied politics, philosophy and economics between 1964 and 1967.

But in recent months she has attracted growing criticism for her response to the Rohingya humanitarian crisis. In September, the governing body of St Hugh’s decided to remove a painting of her from its main entrance, days before the start of the university term and the arrival of new students.

In October, undergraduates at St Hugh’s voted to remove the Myanmar leader’s name from the title of their junior common room.

So far, Oxford has decided not to reconsider Suu Kyi’s honorary degree. But the university has expressed its “profound concern” over the treatment of the Rohingya minority in Myanmar.

At the start of November, musician Bob Geldof returned his Freedom of the City of Dublin award, also held by Suu Kyi, in protest at her response to the Rohingya crisis.