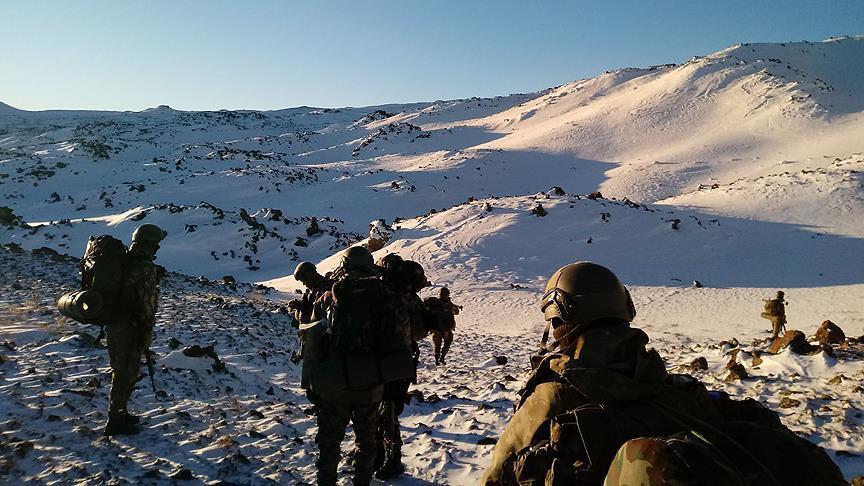 Caves and shelters used by PKK terrorists have been destroyed in counter-terror operations in eastern Turkey, a military source said on Wednesday.

Axar.az reports citing AA that special forces and gendarmerie commandos started the operation against the PKK terrorist group on Nov. 26 on Mt. Tendurek, located between the town of Dogubeyazit in eastern Agri and the town of Caldiran in the Van province, said the source, who asked not to be named due to restrictions on speaking to the media.

Caves and shelters where the PKK terrorists were likely living were destroyed in the three-day operation with support from Atak helicopters and Firtina tanks.

More than 1,200 people, including security force personnel and civilians, have lost their lives since the PKK -- listed as a terrorist organization by Turkey, the U.S. and EU -- resumed its decades-old armed campaign in July 2015.

Separately, at least 28 suspects were arrested Wednesday in Van for their links to the PKK terrorist group.

Police arrested 17 PKK suspects in simultaneous raids in several districts of the Van province, said a security source who asked not to be named due to restrictions to talking to media.

A number of documents, weapons, and ammunition were also seized during the operations.

In the eastern Mus province, 11 PKK suspects were arrested on charges of spreading terrorist propaganda on social media.

Among the arrested suspects was a PKK member previously sentenced in absentia to over six years in prison for being a member of an armed terrorist group.