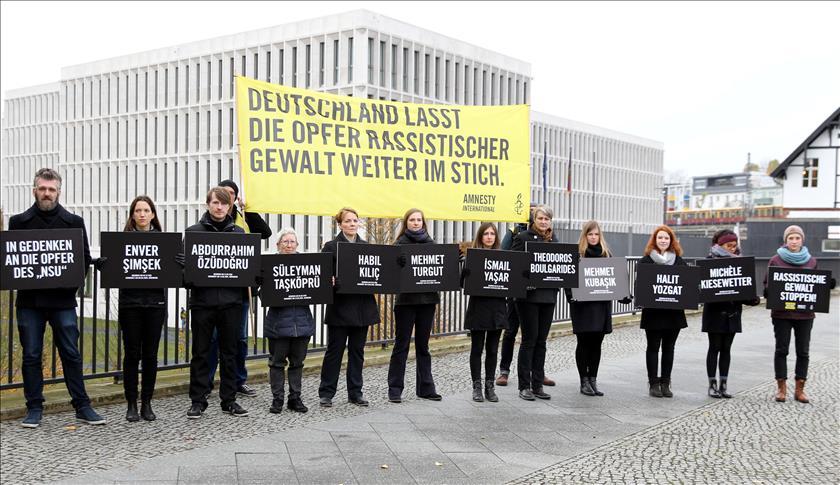 Axar.az reports citing AA that the neo-Nazi group killed eight Turkish immigrants, a Greek citizen, and a German policewoman between 2000 and 2007, and recent investigations have revealed severe failures of intelligence and police units in Thuringia in disrupting the terrorist group.

Left Party lawmaker Katharina Konig-Preuss announced that Thuringia’s socialist-led coalition government had agreed to pay €1.5 million ($1.78 million) compensation to families of the victims, and others injured in bomb attacks carried out by the terrorist group.

“This monetary compensation cannot be regarded as an adequate redress. But we would like to demonstrate that we are aware of our responsibility," Konig-Preuss, who led the efforts at Thuringia state parliament to shed light on the NSU murders, said in a press release.

The initiative taken by the ruling coalition government of the socialist Left Party, Social Democrats and the Greens, could not receive the support of Chancellor Angela Merkel’s Christian Democrats, who are in opposition in Thuringia.

Christian Democratic Union (CDU), together with the far-right Alternative for Germany (AfD) had opposed the compensation fund for the NSU victims.

The NSU is believed to have been founded by three far-right extremists Uwe Mundlos, Uwe Bohnhardt and Beate Zschaepe who lived in Thuringia in the early 90s.

The group carried out murders, bomb attacks and robberies in 12 different German cities between 2000 and 2007.

The German public first learned about the existence of NSU on Nov. 4, 2011, when two members of the group -- Uwe Mundlos and Uwe Bohnhardt -- reportedly died in a murder-suicide following an unsuccessful bank robbery.

Until 2011, Germany’s police and intelligence service ruled out any far-right motive for the murders and instead treated immigrant families as suspects.

Zschaepe is currently standing trial for her alleged role in the murders. So far, she has denied any role in the killings and tried to lay the blame on her two male accomplices.

Recent revelations have shown that German domestic intelligence agency BfV and its local branches had dozens of informants who had contacts with the NSU suspects in the past.

However, officials insisted that they had no prior information about the existence of the NSU terror cell and its role behind the killings.