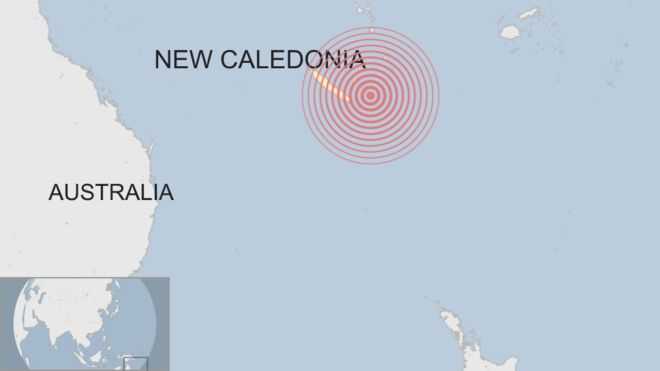 A 7.5 magnitude quake has struck close to New Caledonia in the Pacific, with a tsunami alert issued for coasts within 1,000km (620 miles).

The quake struck at a depth of 10km at 04:18 GMT, with its epicentre 168km east-south-east of Tadine, a town on one of New Caledonia's Loyalty Islands.

New Caledonia is part of the Pacific's "Ring of Fire", where many earthquakes occur.

It is a special collectivity of France with a population of about 270,000.

The Pacific Tsunami Warning Center said that some tsunami waves had been observed and that hazardous waves were forecast for some coasts.

Agence France-Presse reported that residents in New Caledonia had received text messages telling them to go to shelters immediately,

New Zealand's ministry of civil defence and emergency management tweeted that there was no tsunami threat to the nation's coasts.