"Armenia is the only source of radioactive danger" 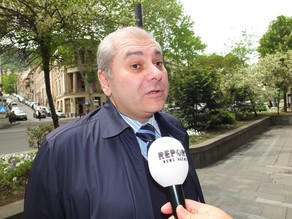 In mid-April, 6 persons, including 3 Armenian citizens, have been detained in Georgia while trying to sell uranium. Recently, other 8 people have also been detained while selling this dangerous substance for 3,000,000 USD.

According to analysts, politicians and experts, however, the seized substance is not suitable for the production of nuclear weapons, but it is a serious source of threat for the society as a dirty radioactive material.

Director of Georgian Center for Terrorism and Political Studies, professor at Tbilisi State University, political analyst Badri Natchkebia commented the issue in his interview to Report News Agency: 'The South Caucasus region is distinguished by its complexity and importance, Georgia and Azerbaijan is considered as a bridge to the West and the East. However, some forces and countries don't want prosperity, development and strengthening of our states. Therefore, create serious obstacles in different ways. 6 persons, including 3 Armenian citizens, have been detained in Georgia while selling uranium, which is used for nuclear weapons or reactors. The question arises, where these radioactive substances can be brought from? Radioactive substances removed from Georgia 20 years ago. Azerbaijan has not any nuclear reactor at all. In this case, we can say that real source in the South Caucasus is Armenia. Even without taking into account that some of the arrested are Armenian citizens, as a result, we can say that this substance is brought from Armenia.

Armenian Nuclear Power Plant has been working using this substance. You might think that this dangerous material passed into the hands of others for many years, especially during the period of chaos and now reveal. There is nothing strange or hidden. This is the most likely'.

According to the analyst, one of the forces that are interested in obtaining such items are terrorist groups: 'Nuclear technology, to acquire nuclear weapons is a dream of every terrorist organization'.

Badri Natchkebia didn't exclude the exposure of large-scale projects, implemented in the region, to terrorism by using these substances.

He stated that some terrorist organizations in the North and South Caucasus even recognized internationally. Some forces use these organizations to destabilize the situation in large and small states, create conflicts and chaos.

'Therefore, I don't exclude any terrorist incident to occur in the region, suffering of large-scale projects and in general, our people', Natchkebia stressed.