Up to 80 people injured in anti-government protests 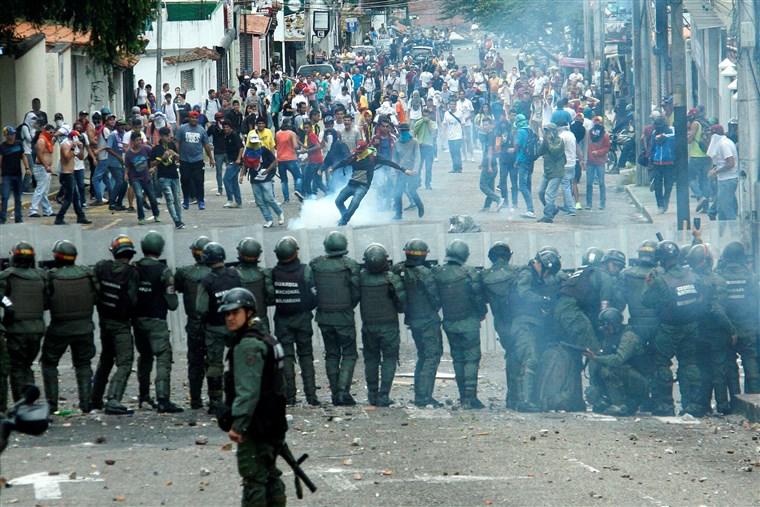 At least 78 people were injured on Wednesday in clashes with law enforcers during anti-government protests in the Venezuelan capital of Caracas, National Assembly’s deputy from the state of Miranda Manuela Bolivar stated.

According to information from the opposition forces, anti-government protests took place on Wednesday across the whole territory of Venezuela.

Venezuelan Minister of Defense Vladimir Padrino Lopez wrote on his Twitter account on Wednesday that at least eight law enforcers were wounded in clashes with protesters.

"Eight military servicemen have been already wounded sustaining gun wounds as they were carrying out their Constitutional duties and encountered violence on behalf of the coup supporters," Lopez stated. "How much longer this lawlessness will continue?"

Venezuelan President Nicolas Maduro earlier said that five military servicemen were wounded during the anti-government protests, with two of them hospitalized in a critical condition.

Protests erupted in Caracas and several other cities in Venezuela after a group of military servicemen sided with Venezuelan opposition leader Juan Guaido. According to earlier reports, during the protests, which resulted in clashes with security forces, a few dozen people were injured in the capital of the country.

Guaido posted a video on Twitter on Tuesday urging the Venezuelan military to take to the streets in order to "end the usurpation" in the country. A group of military officers and head of the Popular Will party Leopoldo Lopez appeared Guaido’s video.