Associated Press made correction to story on Karabakh 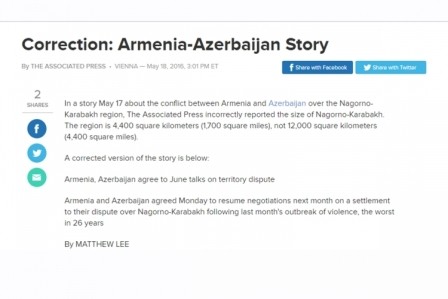 The Associated Press’s Vienna bureau made correction to the story on Nagorno Karabakh and re-published it under title of “Correction: Armenia-Azerbaijan story”, after receiving a letter of protest of the Azerbaijan’s Foreign Ministry.

Azerbaijani Foreign Ministry appealed to the Associated Press that the word “dispute” used in the story regarding the Armenian-Azerbaijani conflict distorts the true nature of the conflict and runs contrary to the terminology applied in connection with the conflict. This word was removed from the title of the story.