The meeting between Erdogan and Zelensky has ended 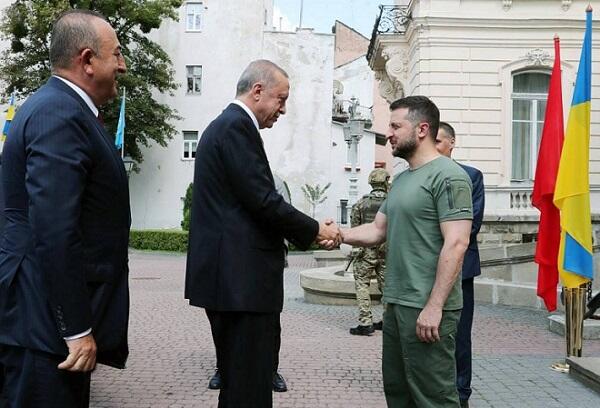 Axar.az reports that the "CNN Turk" channel of Turkey reported on this.

According to the channel, Putin and Zelensky can meet to determine the "road map" regarding Ukraine.

"Zelensky proposed a bilateral meeting to Russian President Putin four times. This proposal of Kyiv was always rejected by Moscow with the answer "There is no specific issue for the leaders to decide". However, before the tripartite summit to be held in Lviv, it is observed that Russia has started to soften its tough position. According to Russian sources, Vladimir Putin may meet with Vladimir Zelensky. The Russian side said that the leaders will be able to determine the "road map". After that, the delegations can start working on the implementation of this "roadmap". "Even if there is no permanent peace in Ukraine, at least achieving a lasting ceasefire will depend on what messages Zelensky gives to UN Secretary-General Antonio Guterres and Turkish President Recep Tayyip Erdogan at the Lviv summit," the channel said.

The meeting between Turkish President Recep Tayyip Erdogan and his Ukrainian counterpart Vladimir Zelensky has ended.

The leaders discussed the war in Ukraine, including grain exports.

It should be noted that the meeting of V. Zelenskiy with UN Secretary General Antonio Guterres also took place.

President of Ukraine Volodymyr Zelenskiy announced the details of the meeting held in Lviv with his Turkish counterpart Recep Tayyip Erdogan.

During the discussions, the situation around the Zaporozhye NPP and bilateral military cooperation were discussed.

"The visit of the President of Turkey to Ukraine is a clear indication of the support of such a powerful country. At the meeting in Lviv, we discussed with Recep Tayyip Erdogan the possibilities of improving the grain initiative, the situation around the Zaporozhye NPP. We also touched upon issues of cooperation in the field of defense," the Ukrainian leader noted.