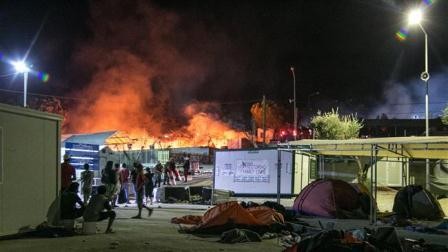 A large fire swept through the Moria refugee camp on the Greek island of Lesbos on Monday night, destroying tents and prefabricated homes. Around 4,000 people had to be evacuated. There have been no reports of injuries.

The authorities are unsure whether the blaze was started by migrants frustrated by long delays in processing procedures and over crowding.

Lesbos is currently housing 5,600 refugees but it only has capacity for 3,600.

“In Greece today, the challenge of humane and affective refugee and migration management is tested. If we, the international community, fail in supporting this effort not only the social, but also the political repercussions will be felt, not only in Greece but anywhere.”

He added if legal channels of migration are not created “we will give space to nationalistic, xenophobic forces to show their face.”

Tsipras was attending the first-ever UN Summit for Refugees and Mirgrants. where on opening delegates adopted a landmark Declaration which expresses their political will to protect the rights of refugees and migrants, to save lives and share responsibility for large movements on a global scale.

It also contains commitments both to address current issues and to prepare the world for future challenges, including, to start negotiations leading to an international conference and the adoption of a global compact for safe, orderly and regular migration in 2018.