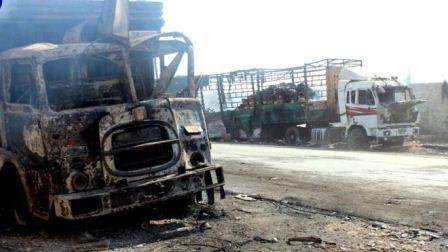 The US has said it holds Russia responsible for a deadly attack on an aid convoy near the Syrian city of Aleppo on Monday.

The White House has called it an "enormous humanitarian tragedy".

Meanwhile, US officials have told that two Russian war planes were responsible for the attack.

Russia strongly denies involvement of its own or Syrian planes, and says the incident was caused by fire on the ground and not by an air strike.

"There are no craters and the exterior of the vehicles do not have the kind of damage consistent with blasts caused by bombs dropped from the air," a statement from the defence ministry said.

And the country's foreign ministry spokeswoman said the US government had "no facts" to support its claim, adding: "We have nothing to do with this situation."

But US officials, speaking in condition of anonymity, said two Russian SU-24 attack aircraft were in the sky above the convoy at the precise moment it was hit in Urum al-Kubra.

The strike, they added, was too sophisticated to have been carried out by the Syrian army.

White House spokesman Ben Rhodes later said: "There only could have been two entities responsible, either the Syrian regime or the Russian government.

"In any event, we hold the Russian government responsible for airstrikes in this space."

The UN had earlier said it was "not in a position to determine whether these were in fact air strikes".

Eighteen of 31 lorries were destroyed and about 20 civilians were killed including a senior official of the Syrian Arab Red Crescent.

The attack prompted the UN to suspend all aid convoys in Syria.

Meanwhile, diplomats in New York were trying to save a week-old truce agreement brokered by the US and Russia which was declared over by Syrian military hours before the incident.

US Secretary of State John Kerry, speaking alongside his Russian counterpart Sergei Lavrov, insisted the cessation of hostilities deal was "not dead", following talks with delegates of the Syria Support Group.

They are to meet again on Friday. And the UN Security Council is due to hold a high-level meeting on Syria on Wednesday.

'Blood on their hands'

Earlier, Ban Ki-moon, the UN chief, launched a stinging attack on Syria's government, saying it has killed the most civilians in the five-year civil war.

Using unusually blunt language in his final address to the UN General Assembly, Mr Ban also said those who supported the opposing sides in the conflict had "blood on their hands".

"Many groups have killed many innocents, but none more so than the government of Syria which continues to barrel bomb neighbourhoods and systematically torture thousands of detainees."

He said other countries "that keep feeding the war machine also have blood on their hands".

Mr Ban called the attack on the aid convoy "sickening, savage and apparently deliberate" and called for those responsible to be held to account.

"The words of Ban Ki-moon today on Syria are far removed from the provisions of the UN charter, which need to be respected by (the person) who occupies the role of secretary general," a foreign ministry statement said.
It said the UN had "failed in its role" to find solutions to international conflicts.

Aid deliveries to besieged areas had been a key part of the cessation of hostilities.

The president of the International Committee of the Red Cross, Peter Maurer, denounced the attack as a "flagrant violation of international humanitarian law" and said it could amount to a war crime.

The Syrian military and rebels have accused each other of widespread violations of the ceasefire deal.