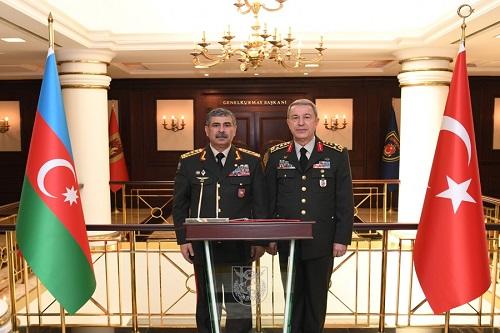 The visit of a delegation led by the Minister of National Defense of the Republic of Türkiye Mr. Hulusi Akar to Azerbaijan ended on May 29.

As part of the visit, the delegation, which included the Chief of the General Staff and the commanders of the forces of the Republic of Türkiye, visited several military units.

The Minister of Defense of the Republic of Azerbaijan, Colonel General Zakir Hasanov, and the Minister of National Defense of the Republic of Türkiye Mr. Hulusi Akar got acquainted with the military equipment available in the armament, as well as with the conditions created in classrooms and other military facilities. The military leaders of both countries met with servicemen and wished them success in their future service.

The Azerbaijan Minister of Defense saw off the guests at the Heydar Aliyev International Airport.