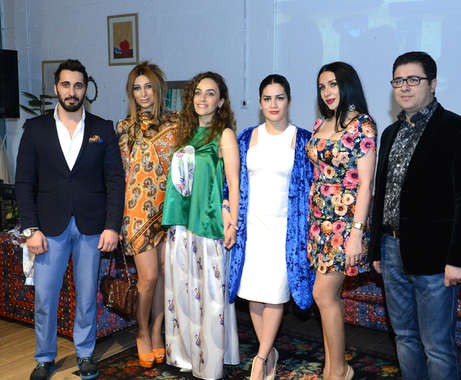 A new fashion collection "Khari Bulbul" by national artist and designer Lala Agayeva was presented at CHELEBI Furniture and Decor company in Baku. The collection was devoted to a very rare and beautiful flower which grows in Azerbaijan’s Shusha, which is currently under Armenian occupation.

The opening ceremony displayed a video about Shusha accompanied by the songs performed by masters of Karabakh mugham school. The face of the collection was the famous poetess Zahra Badalbeyli, who was born in Shusha.

The host of the event, famous actor Salman Nazar noted that the main objective of the project is the promotion of national heritage of Shusha.

"Shusha is considered one of the beautiful corners of Karabakh. It`s a cradle of the Azerbaijani music. As the outstanding Azerbaijani poet Samad Vurgun said, "almost all the popular singers and musicians of Azerbaijan are natives of Shusha. No wonder why Shusha is called the cradle of music and poetry. The city is rightly called the "Conservatory of the Caucasus, " said designer Lala Agayeva.

The collection is also a tribute to the memory of Azerbaijani martyrs of the Karabakh war. The new fashion collection conveys the designer’s deep love to the historical land of Azerbaijan. The artist painted Khari Bulbul flower and transferred it into a fabric in order to show inextricable link between the art and culture of Azerbaijan with its history.

Zahra Badalbeyli, for her part stressed that the task of artists is not only to create exciting collections, but also to pay attention to patriotism.

"I love the theme of Khari Bulbul and Shusha, since I was born there. I hope to see our lands liberated from Armenian occupation,” she said.

The flower Khari Bulbul, after which the collection was named, grows only in Shusha. Khari means "bee" and Bulbul means "nightingale." If you look at the flower closely, you can easily see three petals spreading in three different directions. Two of them are like wings, and the third one in the middle is shaped like a bird’s head.

There are many legends associated with the flower. One of the stories is about the daughter of Karabakh Khan Ibragimkhalil –Aga Beyim Aga. When she married Iran’s Shah, she missed her motherland. Her husband, who loved his wife, decided to stretch Karabakh garden right there, in Iran and planted Khari Bulbul.

Shusha, one of the unique cultural centers of Azerbaijan, is a city, characterized for its natural beauty, and is a valuable monument of national architecture and medieval urban art. Constantly keeping the Azerbaijani national-spiritual values and traditions of music, Shusha before forming as a city of great economic, political and cultural significance, has passed a rich way as a center of Karabakh khanate, played its role in the lives of the people of Azerbaijan. This city, which went down in history thanks to Gasim bey Zakir, Khurshidbanu Natavan, Mir Mohsun Navvab, Najaf bek Vezirov, Abdurrahim bey Hagverdiyev, Yusif Vazir Chemenzeminli, Firidun bey Kocharli, Ahmed bey Agaoglu and other eminent personalities, is known worldwide as the cradle of the Azerbaijani mugham.

In the battle for the defense of Shusha, 195 Azerbaijanis were killed, 165 people were injured, 58 people captured and taken hostage. During the occupation the Armenian vandals looted the museums, in which there were thousands of pieces, destroyed hundreds of historical and cultural monuments, defaced shrines and mosques, destroyed a large number of specimens of rare manuscripts, ruined the education and health care institutions.