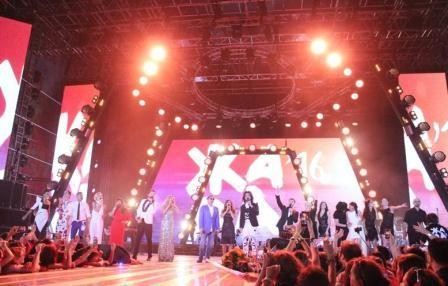 The most grandiose musical celebration of the summer "Zhara Fest" successfully ended in Baku.

For the first time bringing more than 30 stars of Russian and Azerbaijani pop music the festival bestowed an unforgettable evening to music lovers at ground of SEA BREEZE recreation center on July 9-10.

The organizers of the festival were Azerbaijani singer Emin Agalarov, honored artist of the Russian Federation, Grigory Leps, and founder of the Russian radio award "Golden gramophone", Sergey Kozhevnikov.

Addressing the opening ceremony, People's Artist of Azerbaijan Polad Bulbuloglu welcomed the guests of the festival.

"As the Azerbaijani Ambassador to the Russian Federation, I welcome all those joining the festival, colleagues and friends. We believe that the Caspian is the sea of kindness, friendship and neighborliness," said the ambassador.

All the guests of the festival stressed the hospitality of Azerbaijani people.

"Each time I come to Baku I feel pleasure and excitement. Baku is the most beautiful city in the world," said Andrey Malakhov, Russian TV-host.

"There are a lot of things that connect me with Baku. First of all, it's the city of my youth. I often come here to perform a concert, but lately I haven't had a chance to come here. The festival is well organized. As you can see, I came here quite thin, but you have so tasty food that I can't stop eating," said Lolita Milyavskaya.

The organizer of the festival, Azerbaijani singer EMIN said that he was very glad for the festival to be held in his hometown of Baku. He expressed deep gratitude to President of Azerbaijan Ilham Aliyev, First Lady Mehriban Aliyeva and Vice-president of the Heydar Aliyev Foundation Leyla Aliyeva for the support in organizing this festival.

The musician's fascinating performance could not leave one indifferent. He performed "Run away to Baku" composition for the first time in the party.

In conclusion, the participants sang the anthem of the festival under the title "Zhara".

The second day of the festival was no less grandiose. The celebrities walked on the red carpet, taking questions from TV-host Yuliya Lysenko and media representatives. The audience greeted the stars with enthusiastic applause, anticipating an incredible show.

The TV-hosts of the festival inbcluded Yana Churikova, Alexander Revva, Nikolay Baskov, Lolita and Andrei Malakhov, who were sometimes joined by EMIN.

The audience rejoiced, but grieved at the same time -- many wanted the show not to end! But do not worry, because "Zhara Fest" will become an annual event.

The festival will be broadcasted on Azerbaijan television channel AZTV and Channel One Russia on June 16-23.