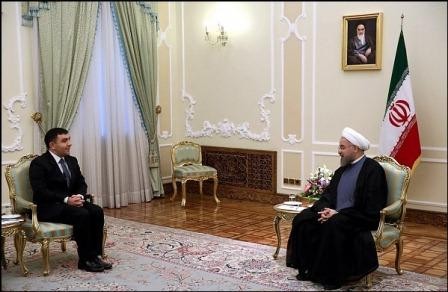 Tehran and Baku should give a serious boost to bilateral relations, Iranian President Hassan Rouhani said.

He made the remarks in a meeting with the new Azerbaijani ambassador to Tehran, Bunyad Huseynov, the Iranian president's website reported May 17.

Rouhani said the post-sanctions situation of Iran should be grasped to enhance cooperation more than ever.

"There are many bilateral agreements and projects, completion of which can mark a positive change in improving relations," he stated.

The Azerbaijani ambassador, who had submitted his credentials to Rouhani earlier in the meeting, said Azerbaijan has never doubted Iran's friendly approach.

He underlined that boosting bilateral, regional and international cooperation will benefit the nations and governments of the two neighboring countries.

Iranian and Azerbaijani officials signed 11 memorandums of understanding (MOUs) on the sidelines of a meeting between Azerbaijani President Ilham Aliyev and Iranian President Hassan Rouhani in Tehran Feb. 23.

The two sides signed documents for cooperation in various sectors, including transportation, electricity swap, health and medical sciences, oil, gas, and petrochemicals, as well as customs, social and women affairs.