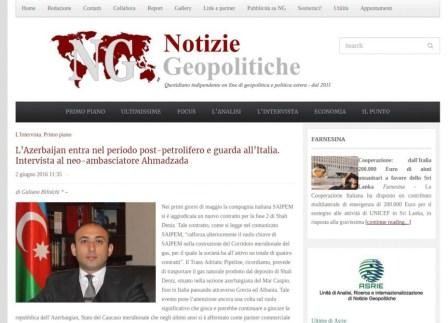 Ahmadzade said that Azerbaijan was one of the key oil suppliers of Italy, adding that a number of Italian companies have been engaged in activities in Azerbaijan as investors and contractors. He underlined that significant agreements were signed with Maire Technimont, Technip and Saipem companies of Italy over the last year.

Providing information on the the next meeting of the Azerbaijani-Italian Intergovernmental Commission on Economic Cooperation and Azerbaijan-Italy Business Forum to be held on June 13 in Italy, the Ambassador hailed the importance of these events in terms of attracting Italian investments in Azerbaijan, increasing the country's non-oil exports and strengthening economic cooperation between the two countries.