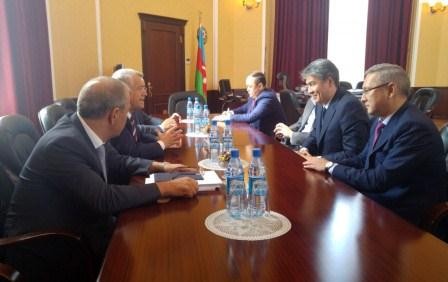 Mayor of Astana Asset Isekeshev and Minister of Energy of Azerbaijan Natig Aliyev discussed Azerbaijan's participation in Astana EXPO 2017 in Baku. Issekeshev briefed the minister on the forthcoming exhibition and its infrastructure. He also called on Azerbaijani investors to participate in the work of a new Astana International Financial Centre (AIFC).

The AIFC has a number of objectives. It will attract foreign investment, open up the Kazakh banking sector and make it easier for insurance companies and Islamic finance institutions to do business. It will attract world leaders in financial services, which in turn will promote best practices in Kazakhstan.

Expo 2017 is an International Exposition scheduled to take place between June 10 and September 10, 2017 in Astana, Kazakhstan. The expo's official theme is "Future Energy", and aims to create a global debate between countries, nongovernmental organizations, companies and the general public on the crucial question: "how do we ensure safe and sustainable access to energy for all while reducing CO2 emissions?".

On November 22, 2012, Astana was chosen by the International Exhibitions Bureau (BIE) as the venue to host Expo 2017. It will be the first time that a major international exhibition of this kind is coming to a country from the former Soviet Union. More than 100 countries and 10 international organizations are expected to participate. Around 2-3 million people are expected to visit the international pavilions from June to September 2017.