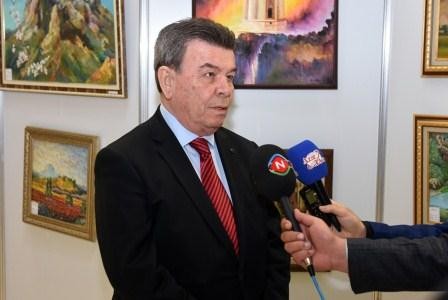 “Nakhchivan has incredibly changed and developed. Excellent infrastructure has been created here,” said Ercan Murat, UNDP Resident Representative ad interim (a.i.) for the Republic of Azerbaijan, as he viewed cultural institutions, historic monuments and production areas as part of his visit to Nakhchivan.

“Beautiful buildings were constructed, the old ones were overhauled with special sensitivity to the historical past, new museums were established. People here live in comfort and prosperity”.

Murat said that he served as UN Resident Representative in Azerbaijan in 1997-2001, adding that he several times visited the autonomous republic those years, when it was in blocade.

"I love Nakhchivan too much. Therefore, I visited Nakhchivan after 14 years to see this wonderful land again. I came, and I was stunned by what I saw here. Nakhchivan has incredibly changed and developed. I could not believe my eyes when I saw the capital of the autonomous republic. Having become much prettier, it has turned into a modern European city," he said