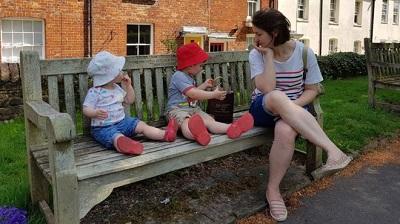 At 29, Ellie Finch Hulme was diagnosed with a condition often associated with much older people - Parkinson's disease. She decided it wasn't going to stop her living her life the way she wanted to.

Ellie doesn't fit the stereotype of someone with Parkinson's disease, as one of her recent tweets makes clear.

People are often shocked when they meet her for the first time, she says.

"I volunteer in a local charity shop occasionally around the kids and around my work and if I'm trembling, if I have to wrap something up - because anything can set off your tremor - someone will say something like, 'Is it your first day here?' And I'll be like, 'No, I've got Parkinson's.'"

They expect someone with Parkinson's to be white-haired and stooping, but Ellie, who lives in Farnham in Surrey, has young onset (or early onset) Parkinson's disease, and was diagnosed before she was 30.