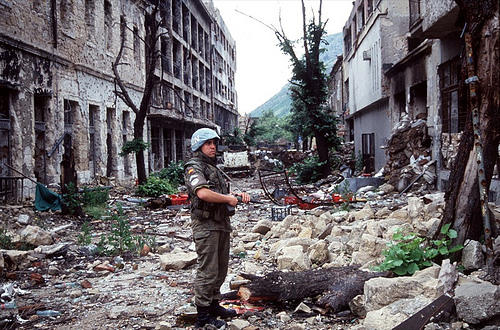 Bosnian victims held in concentration camps run by local Croatian militiamen in the southern part of the country during the breakup of Yugoslavia cannot forget the days they still describe as "hell".

Axar.az reports citing AA that, former inmates spoke to Anadolu Agency ahead of a Wednesday ruling by the International Criminal Tribunal for the former Yugoslavia (ICTY) on appeals by six men convicted of crimes against humanity during the 1992-1995 Bosnian War.

Mustafa Dizdar, who was held in camps in Stolac and Dretelj, said he still experienced nightmares after almost 25 years, adding it was impossible to forget the fear of war.

"When I passed out, they threw water on me and went back to torturing me," Dizdar said, stating that fighters from the Bosnian Croat army beat him with sticks while being held captive in a hospital in Stolac.

Dizdar said he was brought to another camp in Dretelj in August 1993, which he called "another dimension of hell".

"We were held in a lightless room with 64 people. When I first entered, there was a corpse behind the door. They said it had been there for three days. [Soldiers] just left his body as a lesson to the other prisoners."

Dizdar said they were unable to distinguish between night and day when they were being held in the room.

"Whenever the door opened, our hearts came into our mouths because opening the door meant torture. They beat us until they heard screaming.

"They wanted us to scream so the prisoners in other rooms could hear and understand what was coming to them," he said.

Dizdar was saved on Oct. 15, 1993 when a Red Cross team from Switzerland took his name to a referral list for transfer.

Amer Djulic, who was kept for 238 days in different concentration camps under the control of the local Croatian militia, said what happened should never be forgotten and the criminals responsible should be punished.

Describing how he was taken prisoner at the age of 17 and was exposed to various kinds of torture for the best part of year, Djulic said the day of his capture -- Aug. 3 1993 -- was the most painful of his life.

Two of his close relatives were killed in beatings that day.

"I saw the corpses of my relatives who grew up together. For the first time, I saw how a person changes color when dies. I heard voices that I have never heard before. These voices, after 25 years, are still appearing in my nightmares," he said.

Djulic said the next day, the children held in Stolac hospital were taken to another camp, but torture continued in Dretelj, Gabela and Heliodrom.

After going for three days without food at Dretelj, he was taken to the Gabela concentration camp with 400 other prisoners.

He met with his father there. "I was not able to get any report about him for months. When I saw him there, I was both happy and grieved. My dad thought that I was with my mother and sister."

Djulic was taken to the Heliodrom camp after Gabela, but some prisoners were taken away and some never returned.

Djulic said he was released from the Heliodrom camp on March 22, 1994. However, even today, he does not know why he was taken prisoner and why he was tortured.

Stressing that criminals should be punished for their crimes, Djulic said that the criminal convictions of former administrators of the so-called wartime Croatian Republic of Herzeg-Bosnia should stand.