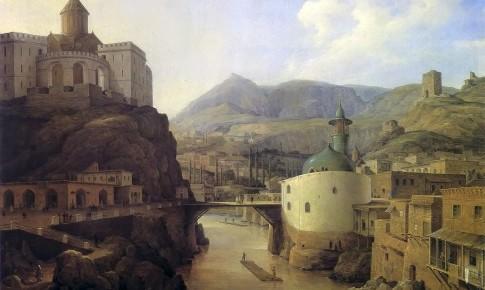 Irakli Okruashvili the former Minister of Internal Affairs of Georgia, Minister of Defence, whose name is always declined in the corruption, at the same time the head of the Labour Party, Shalva Natelashvili who was obliged to retire from the chairmanship in the party after exposing failure in the Parliamentary elections in 2012 and President elections in 2014, then returning back to her party again have made the irresponsible explanations and statements coming to the border region in order to cause a quarrel between the friend and neighbor Republics of Azerbaijan and Georgia with the purpose of restoring their lost images in their countries recently.

Axar.az presents you the statement of Institute of History on “Keshikchidag”:

They were not satisfied with sounding the claims against the Republic of Azerbaijan, and have not deviated from using the abusive expressions against Azerbaijani nation. Their statements have been caused the definite stir in Georgia, and caused the just dissatisfaction among the broader public circles in Azerbaijan. First of all it should be mentioned that, the people such as Irakli Okruashvili and Shalva Natelashvili call “shephard” and “incomers” Azerbaijani nation the friend and brother of Georgian nation, and submit themselves as the most ancient ethnos of all South Caucasus. Even some of them exceed a limit by sounding the stupid ideas connected with taking out about 500 thousand Azerbaijanis the population of aborigine of the Republic of Georgia, and make the unresponsible speeches. In this regard, the Scientific board of the Institute of History named after A.A. Bakikhanov of ANAS states with all responsibility that, Azerbaijani nation is one of the most ancient aborigine of the South Caucasus, at the same time, of the Eastern and Southern Georgia. We state to both slanderers, as well as, to everyone who agrees with them: Azerbaijani nation is a historical successor of the ancient Azerbaijan – state of Albania. The territory of the state of Albania was extending to the most outlying borders of Iberia. Mr. Irakli Okruashvili and Shalva Natelashvili, your ancestors were living in Iberia – the current territory of Imeretia. The eastern neighbors of the Iberians are Albanians, and the western neighbors of Albanians were Iberians. Great Pliny writes that, the border between two nations begins from the passage Daryal, the fortification Kumania (yes, just Kuman!, Mr. Shalva!) locates here, and the world face to face with Hermast and Armazi is divided into the parts (Sarmatiya, Albania and Iberia) (Pliny. VI.26.30). Strabon says that, after receiving Aragvini, Kur flows to Albania through the narrow valley, and it coincides with the territory of the modern Mskheta (Strabo, XI.3.2). Ptolemy generally gives the cities such as Telavi, Tbilisi, Tianeti in the row of Albanian cities (Ptolemey, book 5, section 12). Be acquainted with these sources, if your scientific potential does not allow it, in this case address the works of the Georgian authors. If the persons saying these expressions read their Georgian sources – Kartlis Skhovreba’s “Becoming of Georgia into Christianity”, the works of Leonti Mroveli “Life of Kartly chars”, they could see that, there lived the non-georgian kins called bunturk, khazar and hun by the Georgians in all today’s territory of the South and East Georgia in BC VIII-III centuries. The Georgian sources notes that, in this period the khazar prestige was so strong that, one of six languages that the Iberians speak was the khazar language, all Georgian knew and speak khazar language (Mr. Iraklis and Shalvas! Read this information once more!).

This information also acknowledges the archeological materials. So, the ones who said these claims can see that, these territories completely belongs to kimmer-iskit-sak and early alban-turkish (Yaloylutapa) culture, if they look through the material-cultural patterns of BC VIII-III century. This fact is certified not by us, but just by the Georgian historians – G.Alasania, G.Melikishvili, M.Andronakishvili, R.Abramishvili, M.Sanadze and others.

So, the modern Tbilisi city, the plain Alban in its west and the surrounding territories were not under the management of Iberia, but under the management of Iskit-saks, and afterwards was within the borders of the state of Albania. Arabic Caliphate protected the former historical borders after the termination of the State of Albania during the occupations by Arabs and the territory of Albania began to call as Arran lands. In the middles of VIII century in this territories Tbilisi Turkish-Muslim state – the Emirate of Tbilisi was established in the territory of Tbilisi both the city of Albania, and the bordering city of Islam and its surrounding territories (including Borchali). The territory that you have pretended today was a part of the state of Albania, the lands of the Emirate of Tbilisi. Azerbaijani nation created the ancient culture in the emirate of Tbilisi existing more than 300 years. Hundreds of prominent scientists have been prepared under the nickname “Tiflisi”. You can read the Georgian authors’ works if you are not interested in foreign sources, the historians of Azerbaijani.

Now you pretend to put in a claim for the land with a cloister David Garechi that is the historical monument of Albania located in the historical lands of Azerbaijan. This historical monophysite alban temple do not concern to the diophysite Irakli, Shalva. It is mentioned in the article of the author named G.S. Gordeyev in the edition No. 2 of 1932 of the newspaper «Тифлисские ведомости» that, the head of “”tatars” residing in the right coast of the Kur in Georgia in VI century, that is the Azerbaijani Turks was called Babakar and the first church was built just by in the cloister Keshikchidagh («Тифлисские ведомости», 1832, January, №2). The churches and other Christian monuments existing in this territory were not the patterns of the georgian diophysite church, but were the Albanian cultural patterns of the independent Albanian church. It is necessary to mention that, David Garechi and 12 assuruans coming together with him to these territories in VI century were differed with their beliefs from the monophysite missioner modern Georgians. They had the same belief as the monophysite Albans.

So, the different contracts have been signed taking into account the desires of Georgia connected with the complex Keshikchidagh. As well as, the contract between N.Narimanov - F.Makharadze was signed in July of 1921, according to the contract, the border between two states had been determined. The definite steps have been taken connected with the conflicted border matter between Georgia and Azerbaijan including Keshikchidagh under this contract and some decisions signed up to 1929. But every time these contracts are being tried to breach by you Iraki Okruashvili, Shalva Natelashvili and some other as you. We have investigated deeply the territorial matters and issues in Azerbaijan.

The objective historians know the origin of these matters well also in Georgia. So, there may be the people on border from Azerbaijan who can respond the deliriums of yours. All these historical facts show that, your speeches in the border have no any scientific basis. And the people residing on this side of the border have not come from Altay as you pretend, and they are not “uneducated shepherds” as you think. But in reality, Irakli Okruashvili and like-minded persons should understand that, you have come from Iberia and reside in Imeretia that is the historical land of Azerbaijan. What about the lack of culture and education, our border-guards whom you call uneducated did not answer your swearing and outrages by demonstrating the high culture. When it comes to the vandalism, the destroying of the cultural monuments, you can be answered where did the ancient cultural monuments belonging to the emirate of Tbilisi disappear? What was the future of the great and grandiose mosque built by Sultan Alp Arslan around the city of Tbilisi so it can shadow other constructions with its greatness? Where were disappeared the large and handsome houses of the emirs of Tbilisi? Where were disappeared the mosques where IV David attended after the invasion of Tbilisi after the battle Didgori, then attended, making a donation by I Demeetre in order to win respect of the Moslems? At last, what about the future of the grandiose Shah Abbas Mosque raised at the coast of the Kur? What about the future of the Turkish-Muslim toponyms in Tbilisi and around it? So, please learn the history deeply and do not forget one truth: the native land of 10 million "shepherds" living in this part from Keshikchidagh and of 500,000 "shepherds" living in contemporary Georgia that you intend to evacuate from the country are the land that they reside currently. Although the like-minded persons as Irakli tried to wipe these tracks, “to provatize” these monuments, these people can not be turn off their lands. We recommend you not to forget about the role in your history of more 80 million “shepherds” residing in the west of your border. At the same time, it is necessary to mention that, if there will not be the turk-gipchags that you called “shepherd” IV David and Tamar could not gain any success. Just thank to these “shepherds” IV David could expand the borders of Iberia. So, 45 thousand of IV David’s 60 thousand troop contained the turks that you called “shepherds”. And you have exiled these “shepherds” from their native lands who rescued you in your difficult times, and you do not still want to solve the matter of Akhiska turks!

These “shepherds” always surrounding you never stick the head of ram on the mosques. They approach the Christian belief and monuments with respect. And you having the “high culture” as Irakli Okruashvili, Shalva Natelashvili stick the head of swines on mosques, you do not hesitate to sow seeds of hositility between the nations, at the same time show the attitude as enemy towards the moslem Ajars and Georgians from your family. As for your swearings to your people, the real address of these swearings are Irakli Okruashvili, Shalva Natelashvili and others. Currently it is a craze to call aggressor Russia by you. You consider yourself “innocent” by laying your blames on Russia. It is your own business. But do not forget that, Tsar Russia was brought just by you to the South Caucasus in XVIII century. Do not forget Georgiyevsk treaty! Do not forget that, 500 thousand aborigene Azerbaijani that you call “shephard” was always with you during the difficult moments of the Republic of Azerbaijan.