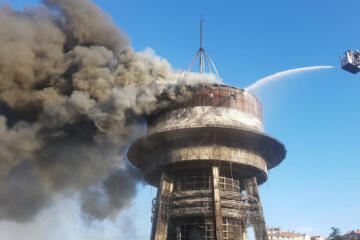 A fire broke out at Ali Kushchu Astronomy Center in Mamak district of Ankara.

Axar.az informs that, the fire first occurred in the tower of the scientific center and then spread to the building.

The center of astronomy has not been killed and seriously injured in the incident since it closed on Sunday. However, eight were reported to have been poisoned by smoke. Nearby buildings were damaged by the explosion.

The cause of the fire is not yet known, and an investigation is underway. The center, commissioned in 2017 as a project by the Mamak Municipality, was not just a place for researchers to visit, but also a place for anyone interested in the celestial bodies.