Dozens killed in attack on Canadian mine workers 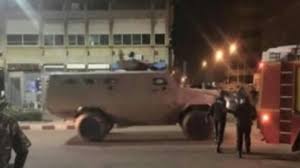 Axar.az reports citing UPI that the attack occurred Wednesday on a road between Fada and Semafo's Boungou Mine, the Montreal-based company said in a statement.

The five-bus convoy transporting Semafo national employees, contractors and suppliers were escorted by military personnel when it was attacked some 25 miles from the gold mine, it said.

Lt. Col. Saidou T.P. Sanou, the governor of the country's eastern region, described the attack as an "ambush."

Nearly 500,000 people have been forced to flee their homes due to the violence with nearly 270,000 displaced in the past three months, the U.N. reported last month, adding that since last year, more than 500 people have been killed in 472 attacks throughout the country.