Strong earthquake in Armenia: There are ruins ... 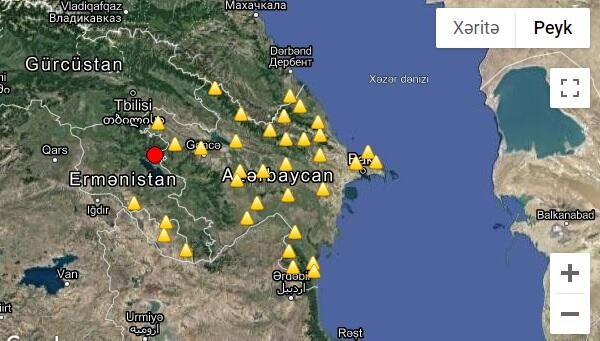 The earthquake which occurred near Goycha lake in Armenia at 19:35 local time was felt in the border regions of Azerbaijan - Gazakh, Tovuz, Gadabay, Ganja 5-4 magnitude, and in other regions - 4-3 magnitude, the Republican Seismological Service Center says.

Axar.az reports that the earthquake was recorded near Goyche lake in Armenia at 19:35 local time, the Georgian Institute of Earth Sciences and the National Seismic Monitoring Center says.

The epicenter of the 5.2-magnitude earthquake was located 81 kilometers from the Georgian border on the border with Azerbaijan. The epicenter was at a depth of 10 km.

The quake was also felt in the western regions of Azerbaijan and Georgia.

As a result of the earthquake in Armenia, several buildings collapsed in Gegargunik province, and electricity supply to settlements was temporarily suspended.

This was stated by the governor of the Gegargunik region Gnel Sanosyan.