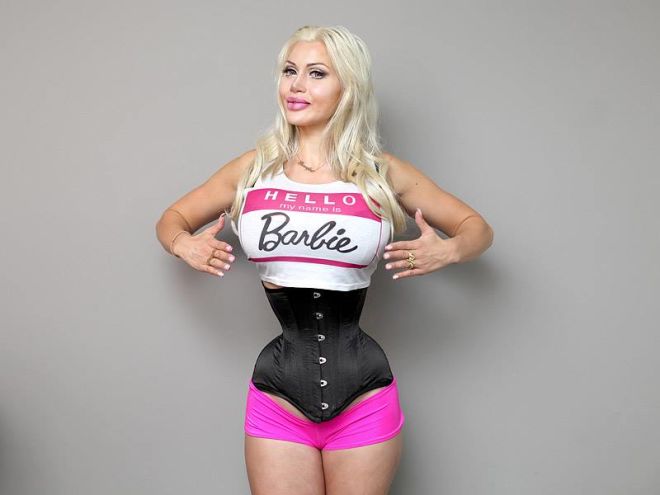 A surgery obsessed 26-year-old has undergone multiple procedures in her bid to become a 'living cartoon' to the dismay of her conservative family.

She has also changed the colour of her eyes, had several boob jobs and most recently pumped up her bottom and lips via a fat transfer procedure. The butt-lift procedure, which has become one of the most popular cosmetic operations in the world, involved removing Pixee's own fat from her thigh and belly before pumping it into the hips, buttocks and lips.

Pixee's latest surgeries were done by Dr Fredrik Berne at Klinik34 in Gothenburg.

Dr Berne said: 'Fat is beautiful. We can shape and create whatever we like with it. Pixee had 1000cc injected into her bum, 500 in each buttock. She now really has got that hour-glass figure. Then, I pushed as much fat as I could into her lips so it will look enormous and, in a way, grotesque. 'But I think it will still not be quite as big as she would have liked.' While they appear comically swollen at the moment, her lips should subside in size over the coming weeks and months.