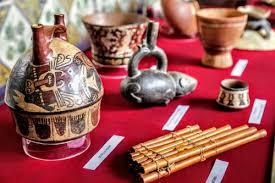 Authorities in Peru have recovered over 1700 artifacts which had been stolen from the country, including pre-Hispanic relics from various lost civilizations in the Andean nation.

More than 1700 retrieved artifacts are the result of international investigations with Peru’s consulates around the world as well as with local authorities in different countries. Artifacts were repatriated from nations such as Argentina, Colombia, Ecuador, Australia, the United States, Holland, the United Kingdom, Sweden, and Switzerland.

“Amongst the objects, we handed over or which we have already handed over to the Culture Ministry is the Moche loom, which was handed over by the Museum of Ethnology in Holland. And you can see to the right that there is the painting ‘The Creation of Eve’, which was stolen from a church in Junin in 1991”, Peru Foreign Minister Nestor Popolizio said.

In the last eight years, Peru has recovered more than 7,000 pieces of stolen relics.