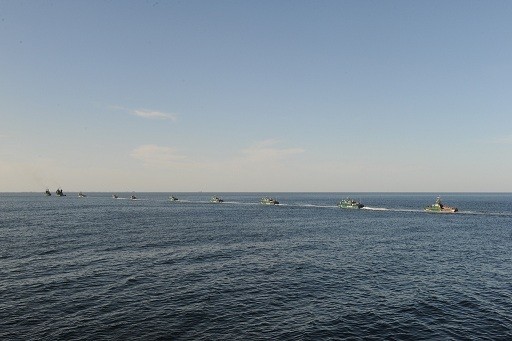 The State Border Service of Azerbaijan has held tactical exercises on organization of border search, neutralization of detected terrorist and subversive groups in case of a threat to oil and gas infrastructure in the Azerbaijani sector of the Caspian Sea.

SBS press service told that the exercises were aimed at the improvement of combat readiness of SBS units for protection of oil and gas fields, submarine pipelines; management skills of commanders; border searches at night and practical skills on conducting firings from rocket-artilleries.

The exercises were held in three stages over ten tactical episodes.

Coast Guard patrol ships and Aviation Unit helicopters’ anti-aircraft artillery and missile complexes successfully carried out daylight and night shootings, and tasks were fulfilled to detect and destroy unmanned aircrafts and subversive boats of the enemy engaged in intelligence in the oil platform, underwater subversive groups of the conditional enemy and the conditional terrorist groups camped on the beach in the dark.


The tasks set forth in the exercises were fulfilled completely.