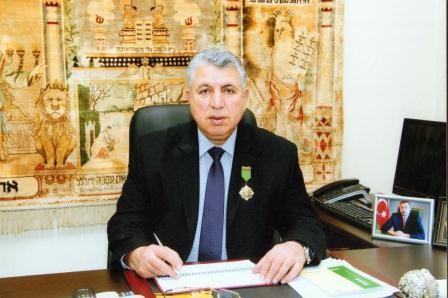 Milikh Yevdayev has posted an article in US online weekly newspaper Jewish Journal article, head of the Community of Azerbaijan’s Mountain Jews, about independence day of Azerbaijan celebrated on October 18.

In 1993, Heydar Aliyev became president of Azerbaijan, Yevdayev wrote in his article.

“With strong leadership and a lifelong commitment to national service, President Aliyev took Azerbaijan from the crossroads of instability, a broken budget and infrastructure, laying the solid foundations for it to become the largest economy and most stable country of the region today,” said the article.

The key factors of Heydar Aliyev's success focused on expanding opportunities for private business, defining and implementing Azerbaijan’s long-term energy strategy, developing trade, encouraging unrestricted multiculturalism and building strong relationships across the region, Europe, with the US and Israel, according to the article.

“Following in his predecessor's footsteps, President Ilham Aliyev has undertaken great efforts to bolster national stability and economic growth,” the article said. “Great evidence of this is the reduction of poverty in Azerbaijan, from 50 percent in 2001, to the current rate of under 5 percent in 2016.”

The author also notes in his article that Azerbaijan’s Karabakh region remains under occupation by Armenia, and Azerbaijan is home to over 1 million Azerbaijani refugees who were subjected to brutal ethnic cleansing in Armenia and the occupied areas of Azerbaijan.

“Despite continued invasions and occupations by neighboring Armenia - Azerbaijan is still home to a large Armenian community, who continue to live peacefully in its capital city of Baku and other major cities,” the article said. “The capital city also boasts an impressive, state-funded Armenian Church, which was renovated by Azerbaijani government a few years ago and houses, perfectly preserved, over 5,000 Armenian books.”

All these are a strong testament to the robust commitment of Azerbaijan to the ideas and values of interfaith tolerance, acceptance and peace, the author wrote.