Confession at the Armenian parliament 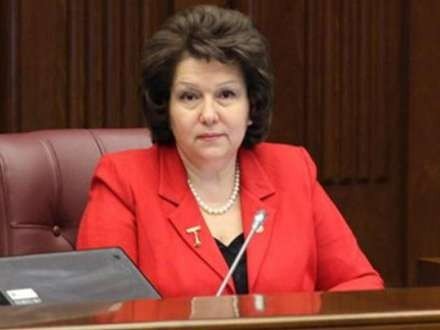 "We do not need to get the wrong idea about the that lands which are under control of us. These baseless ideas may cost us dearly. We should return back the Armenian-captured territories as soon as posible. Then we should withdraw the Armenian Armed Troops from Nagorno-Karabakh. We should realize the fact", Deputy Speaker of Armenian Parliament Hermine Naghdalyan told about it.

Naghdalyan`s statement came like a bombshell not only in the Supreme Council of the Armenia but also in the Media and the community. The headlines in the Armenian Mass Media harshly condemn her statement.

The Deputy Speaker of Armenian parliament Hermine Naghdalyan confessed in her statement that Armenia has no right to make territorial claims in Nagorno-Karabakh and 7 surrounding areas.

Her confession is about the partial change in the logic of Armenian government and positions after 4-day war. Naghdalyan’s statement also shows that Yerevan tries to implement `Madrid principles` in the regulation of Nagorno Karabakh conflict as a way of solution.

S.Sargsyan and Armenian ministers persistently highlight the impossibility of holding negotiations after `four-day war` in Nagorno-Karabakh. In fact, they tend to attract attention of the OSCE Minsk Group and Baku that they are on alert to discuss the version ` territories instead of status`. They only want to make a break after the military operations.

At the same time, Armenia threatens Azerbaijan with new war. However, it knows that it is hazardous for Yerevan to carry out a large-scale military operation in Nagorno-Karabakh conflict zone.

New war will be regional hazard. For the first time, the Deputy Speaker of the Armenian parliament called Armenians to hold negotiations as Yerevan would not be able to endure the Russian and Western pressures.

The world community ad particularly the OSCE Minsk Group have made no headway up to now.