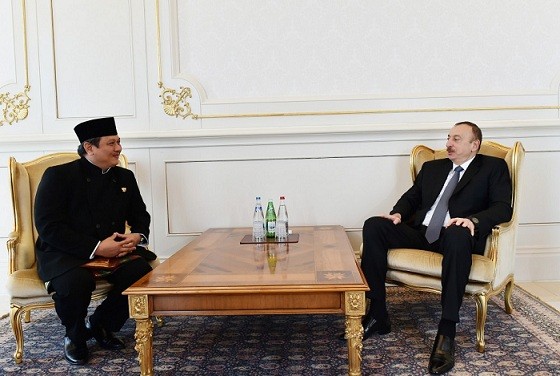 Husnan Bey Fananie handed his credentials to the head of state.

Noting that the bilateral relations between Azerbaijan and Indonesia are developing successfully, the head of state hailed good cooperation between the two countries within international organizations, including the UN and the Organization of Islamic Cooperation (OIC). The head of state expressed his gratitude to Indonesia for supporting Azerbaijan.

Pointing to the partnership relations between the two countries, President Ilham Aliyev said that Azerbaijan is interested in establishing closer ties with Indonesia.

Highlighting the cooperation between the two countries in political, economic, educational, cultural, investment making and other fields, President Ilham Aliyev expressed his hope that these relations would continue to develop successfully.

Stressing the importance of the activity of embassies in both countries, the head of state wished Husnan Bey Fananie success in his activities.

Ambassador Husnan Bey Fananie conveyed the greetings of President of the Republic of Indonesia Joko Widodo to President Ilham Aliyev.

Pointing to the fact that both countries' peoples share the same religion and similar cultural values, the Indonesian Ambassador expressed his hope that the bilateral relations would continue to develop in a variety of fields.

The Indonesian Ambassador said he would spare no efforts to contribute to the expansion of ties between the two countries during his diplomatic tenure.

Husnan Bey Fananie stressed the significance of the Islamic Solidarity Games to be held in Azerbaijan in 2017.

President Ilham Aliyev thanked for the greetings of President Joko Widodo, and asked the Ambassador to extend his greetings to the Indonesian President.