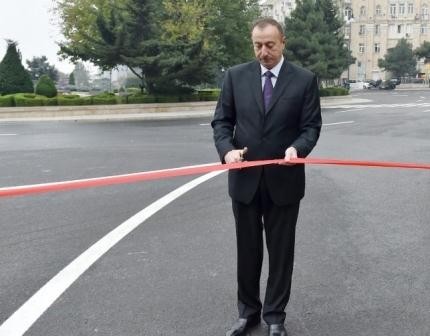 President of the Republic of Azerbaijan Ilham Aliyev has attended the opening of secondary school No. 39 named after Mir Jalal Pashayev in Ganja.

The head of state cut the ribbon symbolizing the opening of the school.

President Ilham Aliyev was informed about major repair of the school, and construction of the new education block. The facility was commissioned in 1962. In 1978, the school was named after Mir Jalal Pashayev following the death of the prominent writer. One of the prestigious schools in Azerbaijan, it won “Best secondary school” contest in 2009-2010 academic year which was held in accordance with a decree of President Ilham Aliyev. The school currently has an enrollment of 2138 pupils.

The 930-seat building of the school was reconstructed on the initiative of the Heydar Aliyev Foundation. The facility covers a total area of 12,000 square meters. The green areas were laid out around the school.

Photo stands reflecting life and activities of national leader Heydar Aliyev and President Ilham Aliyev were installed in the foyer of the four-storey building.

The 1200-seat new block was built through the budget funding. There are classrooms, three workshops, indoor gyms, a library, labs, a medical point, a canteen, a teachers` room and a 150-seat auditorium here.