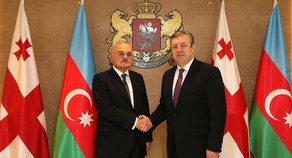 During the meeting the sides have exchanged views on energy projects implemented in the South Caucasus, oil and gas pipelines Baku-Tbilisi-Kars and Baku-Tbilisi-Erzurum, energy corridor East-West, as well as prospects for the development of the railway project Baku-Tbilisi-Kars.

Artur Rasizade mentioned that the two countries have ancient historical friendly relations, Azerbaijan has always has an interest in development of these relations: "At the same time, we understand the importance of projects implemented in Georgia. These projects play an important role in the strengthening of our state independence, as well in strengthening of economic relations."

Giorgi Kvirikashvili expressed gratitude to the Azerbaijani side for the involvement in energy projects, as well as for care and attention to gas and other problems.