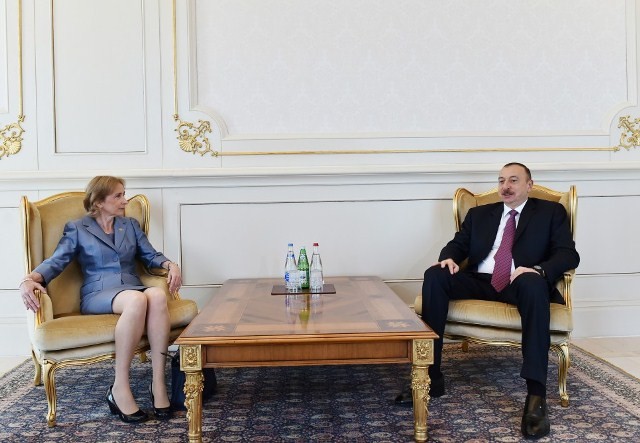 President of the Republic of Azerbaijan Ilham Aliyev has received credentials of the newly-appointed Ambassador Extraordinary and Plenipotentiary of the United Kingdom of Great Britain and Northern Ireland Carole Mary Crofts.

The Ambassador reviewed the guard of honor, and then handed her credentials to the head of state.

Pointing to the broad agenda of the bilateral relations between the two countries, the head of state expressed his hope that Ambassador Carole Crofts would contribute to strengthening these ties.

Ambassador Carole Crofts said her country had maintained cooperation with Azerbaijan for more than 20 years. Noting that BP was the largest investor in Azerbaijan, the Ambassador highlighted prospects for Azerbaijan-UK cooperation. She said she visited Baku and regions of the country, adding that she was impressed by hospitality of the Azerbaijani people and the country`s unique beauty. The Ambassador added that she was amazed by Baku, which she described as an international city.

The head of state said that visiting Azerbaijani regions was a good opportunity for getting familiarized with the country.

They also discussed the ongoing settlement of the Armenian-Azerbaijani Nagorno-Karabakh conflict.