"Sargsyan with his lies could enter the Guinness Records" 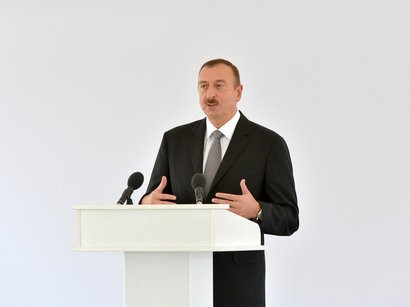 The 4th Congress of World Azerbaijanis has kicked off in Baku on June 3, with participation of the country's President Ilham Aliyev.

President Ilham Aliyev in his speech at the event spoke about the lies of Armenian president Serzh Sargsyan at the May 31 meeting of the EEU member-states in Astana.

Speaking about the 4-day clashes in April when Azerbaijan launched a counter-attack on Armenian occupiers, Ilham Aliyev noted that Sargsyan lied about Azerbaijan gaining back some 800 hectares of territory, while the Azerbaijani side in fact regained control over some 2000 hectares.

Sargsyan's statements about "Karabakh army" controlling the situation on the frontline is a lie, since there no "Karabakh army", only Armenian servicemen, said President Aliyev.

Azerbaijan's president further said that statements about Azerbaijan asking Russia to provide ceasefire regime is a complete lie, since it was Armenia who appealed to Russia.

Ilham Aliyev noted that Serzh Sargsyan with his lies could enter the Guinness Book of Records, and that will be an anti-record.