Hasanov at military facilities in Lachin and Kalbajar 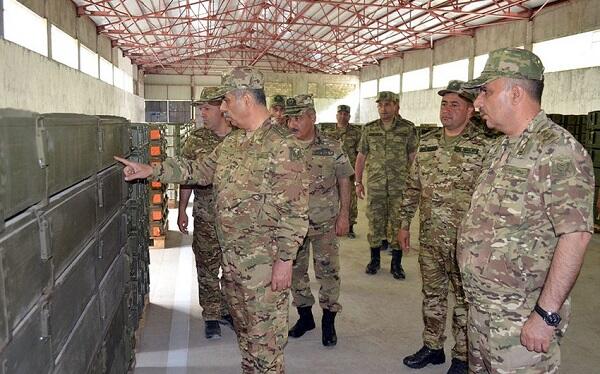 As part of the reforms carried out in the Azerbaijan Army under the instruction of the President of the Republic of Azerbaijan, Supreme Commander-in-Chief of the Armed Forces, Mr Ilham Aliyev, activities on creating a military infrastructure that meets modern standards and increasing the combat training of the units continue.

Axar.az reports citing MoD the Minister of Defense Colonel General Zakir Hasanov and the leadership of the Ministry got acquainted with the work carried out at the military facilities being under construction in Kalbajar and Lachin.

It was reported that the construction of barracks and office premises, a bath and laundry complex, a medical point, and other infrastructure facilities, as well as their provision with modern equipment, are planned to organize military police service at a high level in the liberated territories.

Then Colonel General Z. Hasanov inspected the warehouses of logistics being under construction. It was emphasized that in order to organize the continual and sustainable activity of the troops, regardless of the climatic conditions and terrain, the units will be centrally provided with ammunition, fuel and lubricants, as well as other necessary spare parts and equipment through warehouses built with the consideration of modern requirements.

Having checked the progress of construction work, the Minister of Defense gave relevant instructions on strict compliance with safety rules, high quality and timely completion of construction.