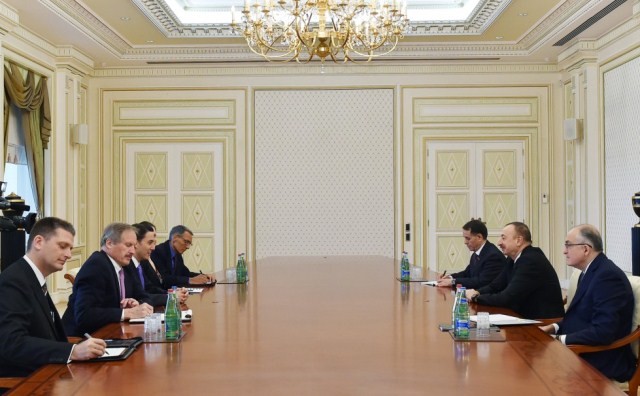 Azerbaijan’s President Ilham Aliyev has received the delegation led by the Special Envoy and Coordinator for International Energy Affairs of the US State Department Amos Hochstein.

Ilham Aliyev said that the second meeting of the Southern Gas Corridor Advisory Council being held in Baku, is a successful format for holding joint discussions on the project’s implementation.

Highlighting the significance of the US government’s support to the project, President Aliyev emphasized the importance of Hochstein’s participation in this event.

Amos Hochstein, for his part, voiced satisfaction with the invitation to the second meeting of the Southern Gas Corridor Advisory Council.

Stressing the effectiveness of last year’s meeting, he said that the ongoing event is very significant in this important period for the project.

Hochstein added that the meeting has created a good opportunity to exchange views on various issues related to the implementation of the Southern Gas Corridor project.

Report informs, the sides expressed their satisfaction with the highest level of friendly and fraternal relations between the two countries in all fields, including energy sector.

They hailed the successful implementation of TANAP project in accordance with the schedule, and also exchanged views on cooperation prospects.

President of the Republic of Azerbaijan Ilham Aliyev has received Deputy Prime Minister and Minister of Energy of Georgia Kakha Kaladze.

The sides hailed the high level of Azerbaijani-Georgian energy projects, and pointed to the successful realization of the Southern Gas Corridor. They hailed the successful implementation of joint projects between the two countries not only in energy sector, but in a number of other areas.

It was emphasized that the two countries would continue their cooperation as strategic partners.