"With love to Azerbaijan" at the Heydar Aliyev Center - Photo 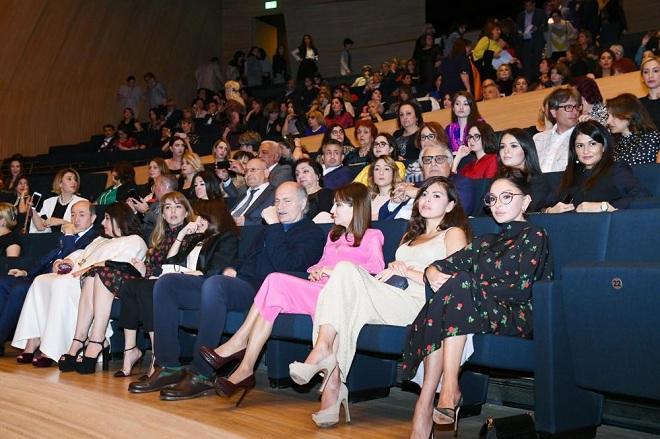 On May 11, Heydar Aliyev Center hosted a concert program "In love with Azerbaijan" with the participation of renowned opera singers Anna Netrebko, Yusif Eyvazov and Elchin Azizov. First vice-president of Azerbaijan Mehriban Aliyeva and Vice President of Heydar Aliyev Foundation Leyla Aliyeva were among the audience.

Axar.az informs that, concert program, featuring arias from various operas accompanied by Azerbaijani State Symphonic Orchestra named after Uzeyir Hajibeyli under the direction of performers Fuad Ibrahimov and Murtuza Bulbul. Works by G. Verdi, F.Cilea and G.Puchchin were performed on the musical night. Note that Anna Netrebko (soprano) is one of the most prominent opera performers of Russia in the XXI century.

He creates an important place in the history of opera art, with his brave and dramatic repertoire. Anna Netrebko entered the list of 100 most influential people in the world of Time magazine in 2007. A.Netrebko, the People's Artist of the Russian Federation and State Prize laureate, has won numerous awards in various countries, including musical art of Russia and Azerbaijan He was awarded with the Order of Friendship of the Republic of Azerbaijan for his fruitful activity in the field of strengthening cooperation in the field of music, including operas, concert programs, solo music albums translated into bestseller and duet with his wife, Yusif Eyvazov.

Yusuf Eyvazov (tenor) is People's Artist of Azerbaijan. The repertoire of the performer includes opera parties that give dramatic talent and vocal skills. The debut of Kavaradossi ("Toska", C.Puchchini) in the Russian State Academic Big Theater in 2010 was the beginning of his international career. He then invited La Scala, Metropolitan Opera, Vienna, Paris Opera and other influential theaters. His name is included in the book "The Best Tenor of the World".

People's Artist of Azerbaijan Elchin Azizov (baritone) became a member of the Baku Boys and Girls Club. In 2005 he studied at the Motsareum University Summer Academy in Austria and later continued his education at the vocal department of the Baku Music Academy. In 2007 she worked at the opera studio of Galina Vishnevskaya. Since 2008 is a soloist of the Russian State Academic Big Theater. Performs at major opera and concert halls around the world. In 2017, along with Anna Netrebko and Yusif Eyvazov, she took part in the opera stars 'Half Way Around The World' concert tour. During the tour he gave concerts in 8 cities of 6 countries.