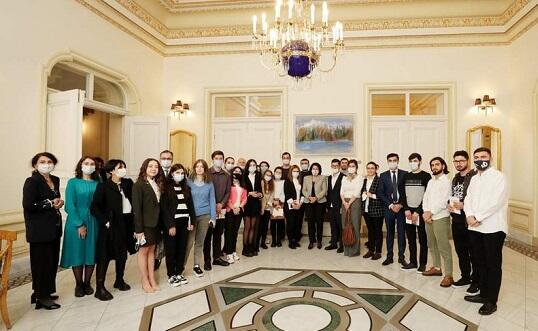 Georgian President Salome Zurabishvili met with participants of the forum "New Generation for Pluralism and Democracy".

Axar.az reports that the meeting, which took place at the Orbeliani Palace, was attended by active Azerbaijani youth from various regions of Georgia, as well as the Kvemo Kartli region.

The meeting was also attended by the Executive Director of the Georgian Azerbaijanis Integration Center (GACC) Orkhan Pirverdiyev. He told Report that Azerbaijani youth spoke about their concerns in education and other areas.

The forum participants also visited the Georgian Parliament. Meeting with the youth, Chairman of the Committee on Foreign Affairs Nikoloz Samkharadze spoke about the priorities of Georgia's foreign policy, the country's integration into European and Euro-Atlantic structures. The discussions also focused on the processes taking place in the South Caucasus region and regional security issues.

Samkharadze stressed the important role of Georgia in ensuring peace and stability in the region.