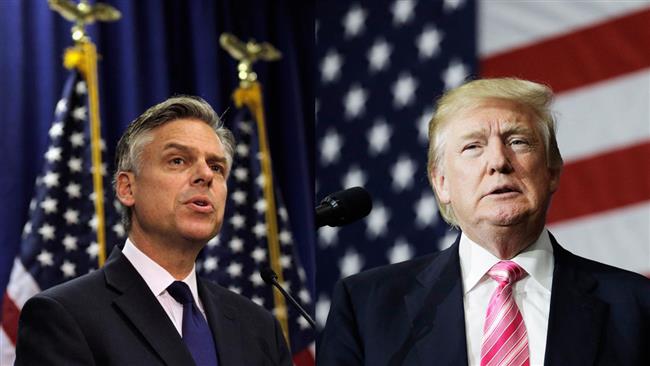 US President Donald Trump has chosen former Utah governor Jon Huntsman as his ambassador to Russia, a high-profile post at a time when Trump’s election campaign officials are under scrutiny over their ties with Russia.

Sources close to Huntsman, a 2012 Republican presidential nominee, confirmed to the media on Thursday that he had accepted Trump’s offer.

If confirmed, this would be Huntsman’s third ambassadorial job, after serving as ambassador to China and Singapore under former presidents Barack Obama and George H. W. Bush, respectively.

A senior White House official said Huntsman was the perfect choice for the job, describing him as a “brilliant” and “tough” politician who understands what Trump is looking for.

Huntsman had called for Trump to withdraw from the White House race over his use of obscene language against women.

However, sources said that he had warmed up to the president and the two maintained a cordial relationship.

“It's a bit bizarre because he was so anti-Trump last year,” one source close to the administration told Politico. “But it's also a smart choice, because he really knows his [stuff].”

The Republican faces a tough task amid allegations that the Trump White House has extensive ties to Moscow, a fact that has already taken victims in the new cabinet.

US Attorney General Jeff Sessions, who was a Trump surrogate during the race, has been accused of not disclosing his meetings with Russian Ambassador to the US, Sergey Kislyak last year.

Trump himself took the spotlight on Tuesday, after resurfaced reports from last year confirmed that he had also met with Kislyak at a VIP reception before a speech on April 27, 2016, six months before the presidential election.

Despite the mounting pressure, Trump and his team have constantly denied meeting with Russian officials during the presidential campaign. Such relations would amount to a breach of laws that prohibit citizens from engaging in matters that concern foreign policy.

In rebuking the allegations, Trump has gone as far as accusing his Obama of wiretapping his campaign, prompting investigations by Congress and some of the intelligence agencies.