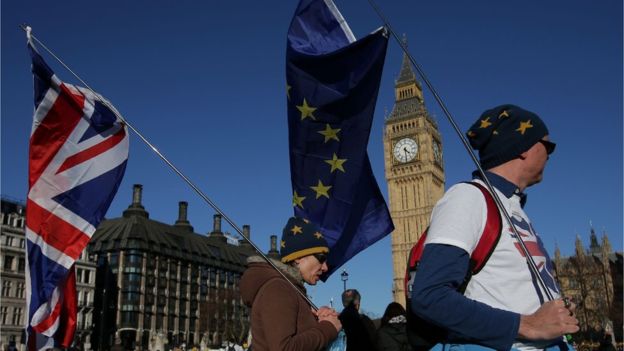 British Prime Minister Theresa May on Tuesday signed the historic letter that will launch Brexit, a photo released by her office showed, as she called for unity even as Scotland voted for a new independence referendum.

The British government will on Wednesday deliver the letter to European Union President Donald Tusk, formally notifying him of Britain’s intention to leave the bloc after 44 years of membership.

Addressing parliament on Wednesday, May will acknowledge that the June vote for Brexit had been divisive, but will express hope “that we are no longer defined by the vote we cast, but by our determination to make a success of the result”.

“We are one great union of people and nations with a proud history and a bright future. And, now that the decision has been made to leave the EU, it is time to come together,” she will say, according to the speech published in advance by Downing Street.

Her comments will come just hours after the semi-autonomous Scottish Parliament backed First Minister Nicola Sturgeon’s call for a fresh independence vote in protest at Brexit.

May has said that “now is not the time” for Scotland to hold a second referendum, but Scottish lawmakers ignored her appeals, supporting the motion by 69 votes to 59.

Sturgeon is now expected to make a formal request for a referendum, which she says could take place by spring 2019 — before Brexit is complete, to allow Scotland to maintain its ties with the EU.

She needs approval from the British government, which repeated Tuesday that a vote on this timetable was “not appropriate” — although it has not ruled out the prospect of a later referendum.

“The mandate for a referendum is beyond question, and it would be democratically indefensible — and utterly unsustainable — to attempt to stand in the way of it,” Sturgeon said.

A few hours after the Scottish vote, Downing Street released a photograph of May signing the letter that will trigger Article 50 of the EU’s Lisbon Treaty, which starts the two-year Brexit process.

Tim Barrow, Britain’s ambassador to the EU, will deliver the letter by hand to Tusk around 1130 GMT on Wednesday — beginning the countdown to Brexit.

Ahead of the letter being delivered, May on Tuesday evening made separate phone calls to Tusk, European Commission President Jean-Claude Juncker, and German Chancellor Angela Merkel.