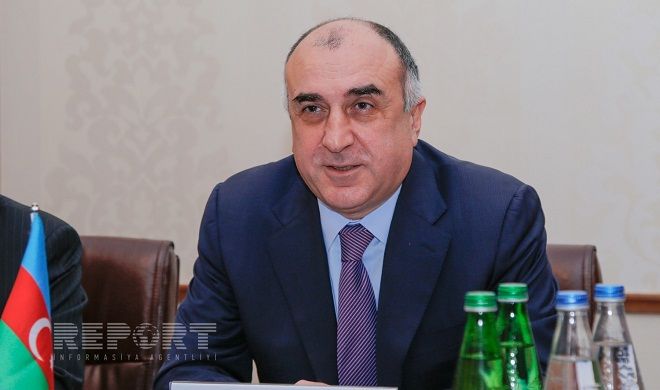 Following the St. Petersburg meeting, Armenia is trying every possible way to avoid the talks on the settlement of the Nagorno-Karabakh conflict, said an article by Azerbaijani Foreign Minister Elmar Mammadyarov in Russian newspaper Nezavisimaya Gazeta.

In his article devoted to the 25th anniversary of diplomatic relations between Azerbaijan and Russia, Mammadyarov said Azerbaijan is making considerable efforts to ease tensions and create a good-neighborly climate in the region.

He stressed that the occupation of Azerbaijani territories by Armenia and the non-fulfillment of the UN Security Council four resolutions on the complete and unconditional withdrawal of Armenian troops from the occupied territories are the main factor undermining stability and posing a threat to peace in the region and in the OSCE area as a whole.

Mammadyarov noted that Azerbaijan is in favor of a peaceful resolution of the Nagorno-Karabakh conflict through negotiations within the framework of international law.

“Therefore, we look forward to all responsible members of the international community to demonstrate a principal position with regard to the restoration of Azerbaijan's territorial integrity. As a permanent member of the UN Security Council and a co-chair of the OSCE Minsk Group, the Russian Federation, which is closely related to the South Caucasus in geographical and historical terms, does have a special role in this respect,” said the top Azerbaijani diplomat.

Mammadyarov recalled that the last talks held in St. Petersburg between President Ilham Aliyev and Armenian President Serzh Sargsyan on the initiative of Russian President Vladimir Putin raised some hope that the long-running question of the withdrawal of Armenian armed forces from the occupied territories of Azerbaijan will finally be resolved in a positive way.

“Unfortunately, after the St. Petersburg meeting, Armenia is trying every possible way to avoid the talks,” he added.