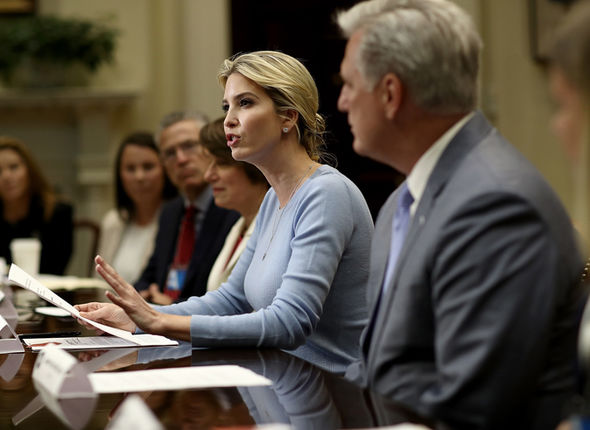 Ivanka Trump led a round table meeting with members of Congress at the White House over the subject of human trafficking, while her father Donald Trump delivered a commencement address to cadets graduating from the US Coast Guard Academy in Connecticut.

The meeting was attended by Democrats and Republicans, and appears to signal Ivanka’s growing role in her father Donald’s administration.

According to the White House pool report, Donald Trump’s eldest daughter spoke for two minutes about the administration’s commitment to combatting human trafficking both in the US and worldwide.

The report said: “She noted that next week is Combatting Trafficking and Child Protection Week in Congress, during which lawmakers will present legislation tailored to this issue.”

White House spokeswoman Lindsay Walters said the roundtable was a follow-up discussion to a meeting in February between President Trump, Ivanka and representatives from several organisations that deal with human trafficking.

Referring to what had been happening since that last meeting in February, Ivanka said at the round table: “We've been conducting interagency meetings... as well as gathering recommendations from the academic, public and private sector.

Ivanka’s appearance at the meeting is in contrast to what she had previously said about her role in the Trump administration.

In an interview with CBS’s “60 Minutes” in November following the election, Ivanka said that she would not hold any formal role in her father’s administration.

She said during that interview: “I’m going to be a daughter.

“But I’ve - I’ve said throughout the campaign that I am very passionate about certain issues. And that I want to fight for them.”

However 2017 has seen Ivanka become a prominent member of her father’s presidency, meeting world leaders such as Canadian prime minister Justin Trudeau.

She also recently moved into her own office in the West Wing and gained high-level security clearance.

Concerns were raised that she was not classified as a government employee, and therefore, did not have to abide by ethics rules.

Ivanka responded by announcing she would instead serve as an unpaid employee in the White House Office, subject to all of the same rules as other federal employees.

Channel 4 recently aired a documentary asking if Ivanka could ever become President of the United States.

Tom Porter, who commissioned the programme, said: “President Trump's daughter has emerged as a major force in his administration and, increasingly, it would seem, in world politics."