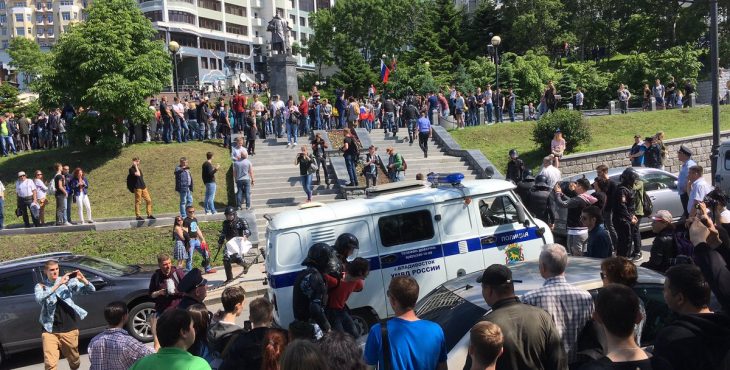 Thousands of Russians are expected to protest against corruption, part of opposition leader Alexei Navalny's long-shot drive to unseat President Vladimir Putin next year by tapping into anger over what he says is official fraud.

There is a risk of violence as supporters of Mr Navalny are expected to descend on Moscow city centre for an unauthorised protest.

The prosecutor's office authorised a venue well away from the city centre, but Mr Navalny said the authorities had pressured firms into refusing to supply him and his allies with sound and video equipment to make themselves heard and seen, a move he said was designed to humiliate them.

For that reason he said he was switching the venue to Tverskaya Street, Moscow's main avenue near the Kremlin, meaning the protest will be illegal in the authorities' eyes and riot police could be ordered to move in to break it up.

Small protests have also been reported in cities in the Russian Far East, the BBC reports.

Today is Russia day, a public holiday, a factor that may boost turnout.

The scale and geographical reach of the protests will give an indication as to whether Mr Navalny can build on the success of a similar protest in March, when thousands took to the streets to call for Prime Minister Dmitry Medvedev, a close ally of Mr Putin, to quit.

Those protests were the largest since a wave of anti-Kremlin demonstrations in 2012 and resulted in over 1,000 arrests, putting rare domestic pressure on Mr Putin, who is expected to run for and win re-election next year. Many of those who attended last time were young people, including some school children.

For now, polls suggest Mr Navalny, who was jailed for 15 days for disobeying a policeman at the last protest, has scant chance of unseating Mr Putin, who enjoys high ratings. It remains unclear too whether the Kremlin will let Mr Navalny run for the presidency.

But the 41-year-old lawyer turned political street campaigner hopes anger over corruption may boost his support.

A video he made accusing Mr Medvedev of owning a giant estate and of living far beyond his means has garnered over 22 million online views to date.

One of Russia's richest businessmen, whom Mr Navalny accused of graft in the same video, won a defamation lawsuit against him last month. A court ordered the video to be redacted to remove the graft allegations