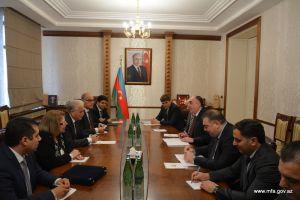 Touching upon historical relations between Azerbaijan and Egypt, Minister Mammadyarov mentioned that the cultural and religious ties give a positive impact to the development of relations between our countries and there is broad potential for strengthening of cooperation.

Expressing his special sympathy to Azerbaijan, Xalid Fuda noted that restoring direct flights between the two countries will strengthen bilateral cooperation and give impetus to the development of tourism.

During the meeting, the sides reviewed the current status of cooperation in tourism field between the two countries and stressed the importance of doubling of efforts to this end.

Recalling his official visit to Egypt last year, Mammadyarov spoke about the meetings within framework of that visit and added that high-level mutual visits give contribution to the development of bilateral cooperation.